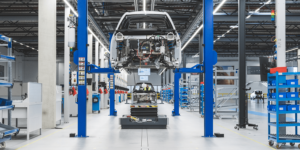 400 km range Renault Zoe: Paris will see the introduction of the 2017 Zoe boasting a 41 kWh battery. It is said to last for 300 km in real life, but has a 400 km rating on the test cycle (NEDC). The electric drive is updated to 65 kW. The new Zoe can be ordered by October for deliveries from January, while the 22 kWh battery option continues to exist.
autocar.co.uk, electrek.co, insideevs.com

More electric goodness from Renault: A first teaser spot reveals Renault’s electric concept ahead of its Parisian debut. The TreZor Concept is powered by 260 kW and is said to accelerate to 60 mph in less than 4 seconds. Two batteries serve the juice. Most striking however, is the TreZor’s design.
insideevs.com

Similarly striking is NextEV’s super sports car of which a first image has surfaced on the internet. The Chinese start-up is working on a 1 MW electric car, which will cost around a million dollars. Next up, however, is a more commercially viable EV, which would also be offered in larger numbers.
electrek.co

Opel presents the Ampera-e live today from 12:15 CET. The show will be streamed from the Paris Motorshow.
opel-tv-footage.com

EV incentives: Macedonia will subsidise purchases of electric cars with up to 5,000 euros from 2017. The incentive package includes tax reductions as EV buyers will pay five instead of 18 percent VAT. Further benefits are fast-charging and free parking. There is also support for converting to natural gas.
seenews.com

Chinese EV in the USA: Sokon from China founded a sub-label to bring its electric cars on the U.S. market. SF Motors has hired Tesla’s original co-founder, Martin Eberhard as a consultant. Eberhard worked with VW on their EV business in the USA and also made a brief appearance at Atieva previously.
electrek.co