Nanowire system: UC Irvine researchers have developed a nanowire-based hybrid energy storage system with reported reversible cycle stability for up to 200,000 cycles and a 94-96 percent average Coulombic efficiency. The battery/capacitor could theoretically be recharged hundreds of thousands of times. The project is funded by Nanostructures for Electrical Energy Storage.
greencarcongress.com 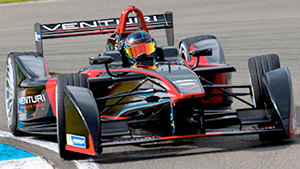 Venturi tech: Formula E team Venturi will be working with Japan’s Rohm Semiconductor to introduce silicon carbide technology at the start of season three. A Venturi Fomula E show car will be displayed by Rohm at this week’s Hanover trade fair, alongside examples of the relevant SiC technology.
vehicle-electronics.biz

Tesla Easter egg: Entering the access code “performance” into a Model S or X, lets drivers test out other model versions. Teslarati downgraded and test drove their P90D at a 90D and 70 level, toggling back and forth between energy consumption values for the different modes. However, they suspect the egg is only for fun and does not provide a real service.
teslarati.com, insidedevs.com

Motor race: Italian Magneti Marelli has developed an electric motor strong enough for the Formula E. The ‘MGU-FE’ has a peak power output of 300 kW and a torque of 200 Nm, while it is said to weigh less than 23 kg. Teams might get to use it from season 3 of the electric racing series.
electricautosport.com

Scraps to caps: Researchers at Oak Ridge National Laboratory and Drexel University are upcycling scrap tires to produce flexible polymer carbon composite films to be used as electrodes for supercapacitors. After pre-treatment and processing, the resulting composite paper is highly flexible, conductive, and has a high capacitance.
greencarcongress.com

ZF EV powered by Akasol: The Advanced Urban Vehicle that ZF presented at the IAA utilises a Li-ion traction battery made by Akasol. Eight modules are divided into three system units (2/3/3) in order to be packed efficiently at the front and the rear axle. The pack holds 16.3 kWh.
greencarcongress.com