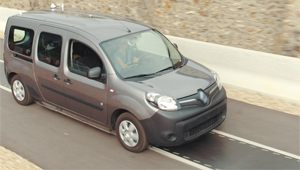 Dynamic charging at 20 kW: Wireless charging of moving electric vehicles has just been demonstrated by Qualcomm as part of the EU backed FABRIC project. The company said its Halo technology delivered up 20 kW to two Renault Kangoo ZE on the 100m test track. They also managed to refuel both vehicles at the same time on the same stretch. Another partner of the 9m euro project, Vedecom, is now to perform further safety tests. FABRIC is to continue through December 2017 with 25 organisations from nine EU countries going d’accord.
qualcomm.com

Compact electric excavator: Volvo Construction Equipment presents the EX2 prototype, an electric excavator said to be ten times more efficient than its conventional equivalent. Plus, he emits only a tenth of the noise obviously but so far, the EX2 is just a concept machine.
lectura.press, forconstructionpros.com (video)

Next-gen steel: 1.8 million dollars have been awarded to AK Steel through the DOE to develop electrical steels for hybrid and electric vehicle motors. The three year project is part of the Next Generation Electric Machines (NGEM) programme and has motor maker Regal Beloit Corporation on board as well.
greencarcongress.com, aksteel.com

Twice the range for any EV is the aim of Swedish fuel cell maker myFC for its Lamina Range Extender. Commercial tests are scheduled for 2018 and myFC says the REx based on its own fuel cell and the patented JAQ fuel and hopes it will combine both worlds of hydrogen and batteries.
cision.com