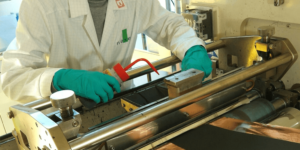 Tesla testing on consumers: Tesla is using the Model S always-on internet connection to pull sensor data from customers’ vehicles. The company reportedly installed the software on drivers’ cars remotely, enabling their self-driving technology to observe and be passively tested on the real road while customers drive.
technologyreview.com

Zero-emission port project: The 26.6m dollar Green Omni Terminal demo project has been launched in California to achieve real-time zero and near-zero emission at the new Pasha marine terminal. The project is funded in part by the California Air Resources Board. Implementation will start in June and will include a fleet of zero-emission cargo handling equipment.
greencarcongress.com

UK-based battery developer Nexeon secured 44m dollars to develop Li-ion batteries with silicon anodes. Compared to batteries with carbon anodes, the Nexeon batteries can delivery almost ten times more gravimetric capacity per gram. The funds will be used to open a lab in Asia and to build a larger factory.
greencarcongress.com

Most clicked link on Thursday was the SAE issued industry guideline for wireless power transfer between infrastructure, vehicle suppliers and OEMs.
chargedevs.com

Military motorcycle: But make it a hybrid… This is the task Logos Technologies was given by the research branch of the Pentagon. The hybrid motorcycle is supposed to enable soldiers to get close to the enemy lines silently, yet escape with full power and range of the combustion engine if they must.
popsci.com, hybridcars.com

New anode facility: The British Nexeon, producer of silicon anode, has finished the construction of its process development and manufacturing facility at its headquarters in Oxfordshire. The factory can produce more than 20 tonnes of product a year and is said to be highly versatile.
greencarcongress.com

Electric flight programme: Students of the Embry-Riddle Aeronautical University in Florida will work together with Powering Imagination to convert a Diamond HK36 motorglider into an electric plane. It might make its first flight already in mid-2015.
daytonabeach.erau.edu via greencarcongress.com