Navya found its new home in the States in the town of Saline, Michigan. It is the first oversea activity for the French manufacturer of autonomous shuttles and Navya hopes to build 25 Armas there this year.
greencarcongress.com, businesswire.com

Lithium offensive in Bolivia: President Evo Morales wants to tap into the world’s largest lithium reserve that rests under the Salar de Uyuni salt flats. After a pilot plant has run for some time, Bolivia now wants to scale up the mining production and processes with 800m dollars to start extraction by 2020. Morales vision goes beyond the raw material though as he sees the landlocked country as a hub for the entire value chain like battery and car factories that promise jobs. For now however, Bolivia faces challenges regarding purity of its lithium but also infrastructure and doubts from investors. Nevertheless, firms from both China and Germany are active in the country already.
dw.com

EV training scheme: CF Motoring Services wants to deliver electric and hybrid vehicle training to 90 staff. The company teamed up with Gateshead College to secure European Social Fund cash for the project, which will see people learn how to repair and restore EVs and hybrids safely.
fleetnews.co.uk 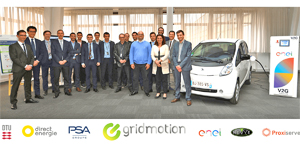 PSA initiates field trial: The French group kicked-off the research project GridMotion together with Direct Energie, Enel, Nuvve, Proxiserve and the Technical University of Denmark. They aim to explore potential energy savings by implementing smart charging and discharging strategies for real-life EVs. Thus, the project team is still looking for participants, who live in France and drive a Peugeot or Citroën with construction date January 2015 or younger.
media.groupe-psa.com

Slowing battery ageing: Based on X-rays, scientists of the Swiss Paul Scherrer Institute show how lithium-sulfur compounds change within a Li-S-battery and lower its capacity. But once they added quartz powder the battery’s performance improved by 25 to 30%.
greencarcongress.com, sciencedaily.com, psi.ch

An exclusive license agreement was forged by the NREL and Forge Nano, in order to commercialise its patented Li-ion battery materials and systems for high-stress environments. The tech bases on the encapsulation of materials with solid electrolyte coatings.
greencarcongress.com

Kandi needs more batteries: The Chinese carmaker had to turn from its current battery suppliers to Zhejiang Tianneng Energy Technology. The one-year supply agreement is to meet the accelerated demand brought about by Kandi’s successful electric car-sharing program.
nasdaq.com

Anode research: Swiss Paul Scherrer Institute has developed a new type of anode material (MSnS2), that is able to cycle in both lithium-ion and lithium-sulfur batteries. The team attained specific charges greater than 750 mAh/g and 500 mAh/g for the Li–S and Li–ion system, respectively, after 400 cycles.
greencarcongress.com, jes.ecsdl.org

Electrochemical research: Toyota and the Electrochemical Society (ESC) have launched the ECS Toyota Young Investigator Fellowship. It is to encourage young professors and scholars to pursue research in green energy technology that may promote the development of next-generation vehicles.
greencarcongress.com, electrochem.org

Fuel cell vans: ULEMCo is planning to roll-out its hydrogen-fuel technology to fleets after its converted vehicles were granted ultra-low emission status by the British approval authority Vehicle Certification Agency (VCA). The vans can run for 200 miles on hydrogen before switching back into diesel mode.
fleetnews.co.uk

Most clicked link on Tuesday was our “Short Circuit” showing Santa Claus shopping at the Galleries Lafayette in Berlin with a Brabus Smart Electric Drive.
automobilesreview.com

Honda parks and charges autonomously: In Japan, a Fit EV is currently being tested which not only charges inductively but parks itself in order to do so. The feature comes in handy in Honda’s domestic market as Japanese garages are particularly small.
transportevolved.com (with video), rte.ie

Imaging fuel cell icing: Researchers at the Swiss Paul Scherrer Institute (PSI) have managed to image water and ice in a hydrogen fuel cell for the first time. They applied a new imaging technique that distinguishes between areas with liquid and frozen water extremely reliably. The problem of ice affecting a fuel cell’s performance might now be better understood and avoided.
psi.ch

20 million dollars will be awarded to ten projects concerning advances in hydrogen production and delivery by the U.S. Department of Energy (DOE). The aim of these projects is to bring the price of hydrogen down to less than four dollars per gallon (about one dollar per litre).
greencarcongress.com

Most clicked Link on Tuesday was the news about Nissan possibly joining BMW-Tesla talks about charging networks.
ft.com