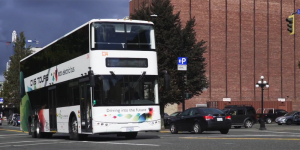 First Low Emission Bus Zone: London has launched its first Low Emission Bus Zone, that bans the dirtiest buses from one of the UK capital’s pollution hot spots. Different from other measure such as the congestion charge zone, the LEBZ targets the city’s outer boroughs. In the case of Putney High Street, it means the 145 buses on seven designated routes in the area have to meet tighter minimum levels for nitrogen oxide. A further 11 zones are due to be introduced by 2020 with two more zones to come into effect from this October.
bbc.com, businessgreen.com

Scoot Networks expands: The LEV sharing service from San Francisco wants to launch in other cities in Europe, Latin America and Asia and has already named first partners such as Mahindra for its GenZe e-scooter and Renault for the Twizy. The fleet of various light-electric vehicles is managed via the new Scoot MOS platform.
prnewswire.com

2020 Olympics powered by H2: Toyota and Honda plan to have at least 6,000 fuel cell vehicles on Japan’s roads by 2020. Tokyo is reportedly ready to spend 45.2bn yen on FCV subsidies of which 1m is reserved for Tokyo residents and 35 hydrogen charging stations. By 2025 , their number shall grow to 80 refuelling stops with the addition of 100,000 hydrogen vehicles and 100 fuel cell buses.
forbes.com

Electric bus pleases: CoMO Connect from Columbia, Missouri, ordered another five electric buses with charging stations from BYD in a lease-to-own agreement over the next 12 years. The lease is valued at about 3.6m dollars. The new buses will join an existing fleet of four.
columbiamissourian.com

Funding for electric buses is to go Porterville, as the Californian town receives 9.5m dollar through the Air Resources Board. The money is earmarked for nine electric buses by GreenPower and charging infrastructure. Deliveries will to start in autumn next year.
recorderonline.com

County charging: 240,000 dollars will be reserved for fostering electric and hybrid vehicles in Sonoma County, California, via an incentive scheme. Meanwhile, six EV charging stations are to be installed for staff and students on the campus of Sonoma State University.
sonomastatestar.com

Rent a fuel cell car: Austrian Tirol offers fuel cell vehicles for hire for testing reasons. One day with a hydrogen car costs 40 euros including insurance. There is one hydrogen charging station in Western Austria.
tirol.gv.at (in German)