Taiwanese Tesla-fighter: Thunder Power published a teaser photo of its electric car, which it will premiere in Frankfurt. The Taiwanese company promises over 370 miles of range, the ability to go from 0 to 60 mph in under five seconds, 316 kW under the hood and a maximum speed of 155 mph. The EV is expected to arrive in Europe in 2017, with a price tag of 400,000 yuan (63,000 USD).
autoexpress.co.uk, carscoops.com

Borgward BX7 SUV: Borgward released first official photos of and details about its upcoming compact SUV, scheduled for launch at the IAA (we reported). The plug-in hybrid version will boast 401 hp and can drive 34 miles fully electrically. The PHEV will first go on sale in China and emerging markets in 2016, while European buyers will have to wait until 2017.
carscoops.com

Mercedes concept car: Mercedes published two teaser shots of a new concept car that it will showcase at this year’s IAA. The carmaker says that this four-door coupé is “an aerodynamics world champion,” representing the brand’s future design language. A preview event will be held Monday evening.
autocar.co.uk, autoexpress.co.uk,carscoops.com

VW camper e-van: Volkswagen will present its all-electric Microbus camper concept at the Consumer Electronics Show in Las Vegas in January. The production version is expected to be smaller than the current Volkswagen Multivan and to have a range of 250 to 310 miles. The vehicle will be produced in Mexico from 2017.
autocar.co.uk

New four-door CLC: Mercedes will launch a new edition of the CLC in 2020, according to Auto Bild. The CLC II will be a four-door limousine, instead of the current two-door sports coupé, and the line-up will include two AMG models with hybrid options. An early version of the CLC 450 Sport plug-in is said to offer 90 kW of electric power, which will later be upgraded to 115 kW.
autobild.de (in German)

Proton Iriz EV: Malaysian automaker Proton unveiled its Iriz EV prototype, a compact car featuring a 39.6 kWh Li-ion battery developed by LG Chem and which is said to provide a range of up to 186 miles. The Iriz EV boast 155 hp and can drive at a maximum of 93 mph. First deliveries are expected by the end of 2016 or the beginning of 2017.
paultan.org 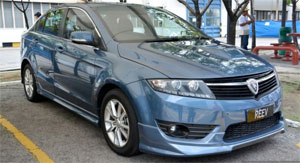