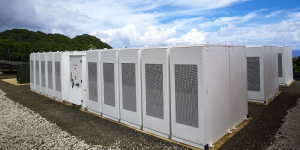 As Puerto Rico experienced major, enduring power shortages and reconnecting the power grid will take at least another 24 hours, Tesla has jumped on the news to help expand the solar and battery grid on the island to become more self-sufficient.

Georgia creates incentive programme for charging stations: The U.S. state earmarked 281,000 dollars for rebates for state agencies and authorities, local governments and educational institutions looking to install charging points. Each organisation or campus can apply for up to 40,000 dollars in government aid. The goal is to install 20 to 30 new stations with the allocated funding.
bizjournals.com

Car Charging Group wins service and operations deal: The company will operate the 27 Blink level-2 chargers in Nashville, Tennessee, and neighbouring Davidson county. According to the Car Charging Group, it is the largest nationwide provider of public EV charging services in the U.S.
money.cnn.com

New Supercharger for California: According to the local newspaper Sierra Sun, six charging posts have been delivered to the town of Truckee. It is a mere 45 miles from Reno, Nevada, one of the sites where the manufacturer broke ground on what could become the Gigafactory. The exact location has yet to be confirmed.
wallstreetpit.com, winnipegfreepress.com

Tesla to build Superchargers on theme park grounds: The carmaker has signed a memorandum of cooperation with Chinese theme park operator Haichang Holdings. The latter agreed to identify location on its grounds for the installation of two Supercharger stations in the northeast of the country. The agreement also foresees the installation of further stations in the future.
forbes.com

First Nissan Leaf delivered in Puerto Rico: A family business focused on renewable projects purchased two of the EVs. Just recently, the car became available in Mexico. The Leaf, which has been sold about 135,000 times worldwide so far, is now available in 35 countries.
electriccarsreport.com