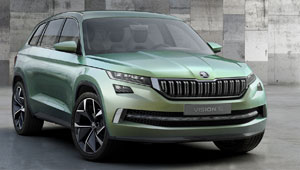 Skoda envisions an SUV that will reportedly come as a PHEV to Geneva. The VisionS concept features an electric drive on each axle and a system output of 165 kW for 50 km range.
carscoops.com, worldcarfans.com

Zero-interest Tesla loans: The EV maker offers Chinese buyers a zero-interest loan for financing the Model S with 90 kWh battery pack to celebrate the new year of the fire monkey. In the U.S., Tesla revived its referral programme, now offering the chance to win a Model X or a Space X tour.
electrek.co (China), electrek.co (USA)

Chrysler EV? The new Pacifica debuted in Detroit, where GM also announced a PHEV version. Now a camouflaged Pacifica was spotted bearing an EV batch. Is there an electric Chrysler in the making?
leftlanenews.com

First drive: Hilton Holloway put a Korean version of the hybrid Ioniq to the test and is convinced by its “simplicity” and effortlessness in a “refined” sense that is true to spec and targeted market.
autocar.co.uk

Rasa FCV update: Welsh company Riversimple Engineering says its fuel-cell-powered two-seater Rasa with wheel hub motors is ready to hit the road. A prototype ready for series production will be tested from autumn. Meanwhile, the company is in talks with the Welsh government to build a production plant with an annual production capacity of 5,000 units.
ft.com

Bosch gets state aid: The company is looking to expand its production plant in Hatvan, Hungary, investing some 19bn Hungarian forint (about 69m dollars). The Hungarian says it will support Bosch’s effort with a 4.7bn HUF (17m USD) non-refundable grant. The expansion will create 601 more jobs, and lead to production of high-tech products, such as control units for new generation electric and hybrid cars, new radars and sensors.
bbj.hu

Manufactured by Google? Despite previously denying that it wanted to get into the car making business, Google is advertising about 36 new jobs related to its self-driving vehicle project – 12 with a special focus on manufacturing. It seems as though the internet giant may not partner with a traditional carmaker, but build much of the hardware itself.
reuters.com

Highly-efficient BMW in the making? Based on information from German magazine Automobilwoche, BMW is developing a high-efficient plug-in hybrid vehicle that will consume a mere 0.4 litres/100 km in the NEDC. However, the car will most likely never make it to serial production since the project’s profitableness is considered low.
techfieber.de (in German)

Hydrogen-powered prototype: British company Riversimple Engineering will build a two-seater featuring four wheel hub motors, a fuel cell and supercapacitors. The car will have a range of 300 miles and the prototype will be built with funding from the Welsh government.
theengineer.co.uk

R8 e-tron EV update: Green Car Congress takes a closer look at the upcoming R8 e-tron. The car will i.e. feature an especially developed liquid-cooled, high energy density Li-ion battery. The 7,488 cells are packed in 52 modules of 144 cells each. More details can be found in the article.
greencarcongress.com

Self-driving Tesla: Forbes has tested the Tesla Model S, owned and equipped with autonomous driving technology by Bosch. While a fully self-driving Tesla Model S is out of reach for now, Forbes is convinced “that it’s only a matter of time before we’ll be able to let go of the wheel when we want. But also drive ourselves when we want, and in the future, have the best of both worlds”.
forbes.com