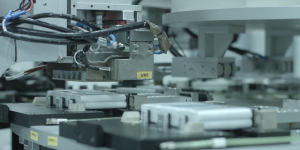 The Electro-mobility Index 2018 by the consulting company Roland Berger and the research institute Kraftfahrwesen Aachen (fka) show how the e-mobility market is developing and underlines the looming dependency of automobile manufacturers on battery cell manufacturers.

Reading tip: In its first “Automotive Disruption Radar”, consultant group Roland Berger systematically depicts global transformation processes in the car industry, including the electric mobility sector. Their study found that 37% of respondents worldwide consider an EV as their next car – in China even 60%.
rolandberger.com

Video tip: The Opel Ampera-e performance is subject of a detailed test report published by Autogefühl. With 43 minutes, the video requires a bit of patience but that is also true for the Ampera-e itself. After all, the model will initially be launched in very limited edition only.
youtube.com

Audi and Porsche play electric catch-up: The brands presented their electric studies “e-tron quattro concept” boasting 370 kW and the “Mission E” with 440 kW on the eve of the IAA. Both have a range of around 500 km and indirectly set out to take on Tesla. A new turbo charging system based on the CCS standard with a 150 kW DC charging capacity is said to help both EVs out of the starting blocks, making them long distance ready by 2018. With the Tiguan, VW also presented its next plug-in hybrid and VW head Martin Winterkorn talked about the prospect of another 20 electrified variants from the Polo to the Phaeton by 2020. On this evening, it seems VW is finally ready to face electric mobility. But: pretty studies are not enough. A successful market launch needs hard facts.
jalopnik.com (Porsche), topgear.com (Porsche), autocar.co.uk (Audi), autoblog.com (Audi)

New Tiguan previewed: VW has published first pictures of the new Tiguan on the eve of the IAA, where the German carmaker will present the plug-in hybrid Tiguan concept. Steeled with 218 hp from the Passat GTE, the former is scheduled for 2016, excluding the U.S. and China.
autoblog.com, yahoo.com

Porsche ponders electrification: With the next generation, all Porsche models could be offered as hybrid and electric variants, Porsche CEO Matthias Müller told auto motor und sport. He also confirmed that the Porsche 911 will be offered as plug-in hybrid come 2018. Furthermore, Müller predicted a fully electric Macan successor by 2021.
auto-motor-und-sport.de (in German) 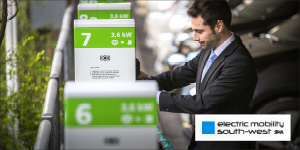 Integrated mobility and energy infrastructures: The new project of the leading edge cluster Electric Mobility South-West “IMEI” is analyzing two typical local scenarios of grid integration of e-vehicles in decentralized mode for home and commercial users and centralized for e-vehicle fleets. Taken into account are, amongst others, aspects of on-site generation and energy storage. e-mobilbw-sw.de

Google scales up: John Krafcik, former head of Hyundai U.S., is now in charge of further development of Google’s self-driving electric vehicles. “A few hundred” could be produced, the Guardian reports citing Sarah Hunter of Google X. The manager also speaks of mass production of Google cars, although that is probably years away.
usatoday.com (Krafcik), theguardian.com (Hunter)

Sluggish growth: According to the E-Mobility Index by Roland Berger and Forschungsgesellschaft Kraftfahrwesen mbH Aachen (fka), EV market share is stagnant in the third quarter of 2o15 in the seven leading automotive nations Germany, France, Italy, the U.S., Japan, China and South Korea. In the U.S. and Japan, it is even declining. Consultants name lack of sales concepts as one of the biggest hurdles of EV uptake.
greencarcongress.com, rolandberger.com (index as PDF)

Chinese EV: Yema Auto presented its electric SUV Yema E70 EV at the Chengdu Auto Show. The EV will go on sale in January 2016 in China for 260,000 yuan (40,800 dollars) after subsidies. Range is claimed to be around 250 kilometres.
carnewschina.com

Germany back in the lead: According to the “E-mobility index” by Roland Berger Strategy and Forschungsgesellschaft Kraftfahrwesen mbH Aachen, the country has the most high-tech offering of electric and hybrid vehicles. The United States remains the biggest market for electric vehicles, neck on neck with Japan in terms of production figures.
consultant-news.com 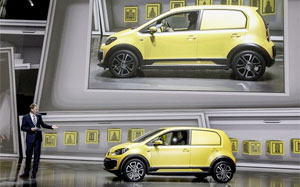 E-Load up! debuts at IAA: Volkswagen Commercial Vehicles will show its all-electric version of the E-Up at the IAA Commercial Vehicles Show starting Thursday in Hanover, Germany. Designed for the delivery and customer service segment, the EV is ready to go into series production and has a 100 km range.
vanfleetworld.co.uk

Hybrid pickup by Mitsubishi and Fiat: The Japanese carmaker plans a new version of its L200, based on the GR-HEV Concept it had shown at the 2013 Geneva Motor Show. Mitsubishi also signed a partnership with Fiat, who will offer its own version of the hybrid utility vehicle.
inautonews.com

Mahindra to take over Peugeot scooters? According to Bloomberg, the French manufacturer is looking to sell the scooter segment, which produces the electric scooter e-VIVACITY. The news agency says talks with the Indian company are already in advanced stages.
bloomberg.com

BMW i8 arrives in Saudi Arabia: Stavros Paraskevaides, Managing Director of Mohamed Yousuf Naghi Motors (BMW Group) expects the hybrid plug-in to be a sales success in the country, as well as causing quite a sensation when hitting the streets there later this month.
saudigazette.com

Research tip: Consultig firm Roland Berger expect the market for “shared mobility” to grow annually by 35% until 2020. Biggest growth drivers will be car and bike sharing as well as taxi services.
rolandberger.de (study as pdf)

Click tip: There must be an army of “Tesla-Fighters” out there if you look at this list of internet postings of cars being praised as Tesla competitors.
teslamondo.com

Event for the upcoming week: International Ecoraces Championship 2014 (26 and 27 July, Barcelona, Spain)
You can find a complete list of upcoming industry events at electrive.com/calendar

Future tip: According to Toyota, the car manufacturer is working on vehicles that hover above instead of roll on the streets. It would not be a flying vehicle, since it would travel really just above the surface.
theverge.com, autoblog.com

Study tip: According to a recent report by consulting agency Roland Berger, China’s carsharing market could grow by 80% per year between now and 2018. The growth rate worldwide is said to be 70% annually.
rolandberger.com

Roland Berger dampens fuel cell hopes: A new study by the german consulting firm suggests that a mass market breakthrough for fuel cells is not to be expected in the near future. However, until 2025 the firm predicts production costs to lower considerably by up to 80% with cost per unit going down to about 1,000 euros (1,370 dollars). The big question will remain the price of platinum.
rolandberger.com

New e-motorcycles: ElectroForce Motors is based in Shanghai where it wants to fill a niche in the market for electric two-wheelers. Their models called Mu and Tau are both offered for less than 5,000 dollars. They come with a power of either 8 or 11 kW and a range between 115 and 150 kilometres.
technologicvehicles.com

Stability through disorder: A new study by Researchers at MIT suggests, that Li-ion battery cathodes made of disordered lithium compounds can outperform perfectly ordered ones. A combination of computer modeling and lab experiments showed, that certain kinds of disorder and the use of an excess amount of lithium can boost cathode performance.
greencarcongress.com