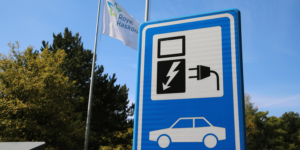 Three specialists from the Netherlands have come together to install what they claim to be the world’s first location where electric vehicles charge using machine learning. The site is at Royal HaskoningDHV office in the city of Amersfoort.

EV privileges in UK? Clean Air Zones to be introduced in Birmingham, Leeds, Nottingham, Derby, and Southampton could see electric cars getting road priority. Proposed privileges include use of bus lanes, exemption from one-way systems and priority at traffic lights for EV. The latter in particular appears a recipe for chaos. Environmental lawyers and campaigners claim the British Government’s initiative to be “too little, too late,” esp. as it is limited to five cities.
bbc.co.uk, theguardian.com, consult.defra.gov.uk (clean air zone draft)

Fleet electrification: 26 BMW i3 are the start of a 100 percent electric fleet for Dutch engineering company Royal HaskoningDHV. The electric cars replace internal combustion engine vehicles and the bureau plans to operate its entire leasing fleet of 625 cars purely electrically by 2020.
eco-business.com

Airport electrification: 12.6m dollars have been awarded to the Indianapolis Airport Authority (IAA) for upgrades that include six electric shuttle buses. It would be the largest electric fleet at any U.S. airport.
ibj.com

Kiwis to go green: Thirty of New Zealand’s largest companies, among them Air New Zealand and Mercury, have agreed to electrify 30 percent of their fleets by 2019. The move will put close to 1,500 electric cars on the road, thus doubling the number of electric vehicles in New Zealand.