New battery cells put to the test: The Californian start-up Seeo has signed a contract with the U.S. Advanced Battery Consortium (USABC), a collaborative organization of i.e. Ford and GM. Under the contract, Seeo will deliver its patented DryLyte battery modules to the consortium for testing. The modules are based on Seeo’s current lithium polymer cells with an energy density of 220 Wh/kg.
chargedevs.com, greencarcongress.com, uscar.org 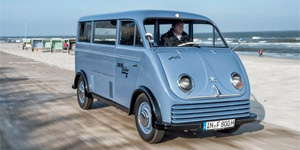 Blast from the past: Audi Tradition has restored a DKW electric “Schnellaster” from 1956, one of only two remaining models. It has a 5 kW electric engine and two lead-acid battery packs, allowing for a range of 80 km. The Schnellaster (rapid transporter) is seen as the predecessor of the minivan.
autoevolution.com

Electric and sustainable: UQM says it has received a U.S. patent for its new electric vehicle motor design using non-rare earth magnets. The U.S. Department of Energy had funded the research and development of the technology with 4 million dollars.
businesswire.com, greencarcongress.com

Learning to fly with the sun: Colorado-based Aero Electric Aircraft is working on a new solar-powered plane. In 2017, the “Sun Flyer” could be ready for take-off. The Spartan College of Aeronautics and Technology has already reserved the first 20 units.
tulsaworld.com

Most clicked link on Tuesday was Sabrina, the first electric car to be built in Iran.
tehrantimes.com

Samsung leads a 17 million dollars investment in the Californian start-up Seeo that claims to have developed a lithium-ion battery that’s less flammable and more efficient than traditional batteries as it uses a solid polymer as the electrolyte. Seeo batteries are currently said to reach an energy density of 350 Wh/kg and might be able to reach 400 Wh/kg next year.
forbes.com, venturebeat.com

Electric ferry running strong: Electrovaya said that its KF Hisarøy electric cable ferry has been sailing in Norway for over one year and completed more than 4,000 trips, with flawless operation. It serves on up to ten round-trips daily between the mainland and the Hisarøy Island, carrying up to 49 passengers and 6 cars. It runs on a 100 KWh battery system based on Electrovaya’s SuperPolymer 2.0 technology.
stockhouse.com

Crowdfunded e-racer: Predator´s has started a campaign on Indiegogo asking for money to build a street-legal racing car. The F1-style PC010 ST will come with either hybrid or electric drive and is supposed to have a price of 20,000 dollars – if you are ready to put it together yourself.
gas2.org, green.autoblog.com

Most clicked link on Tuesday was our report about Bolloré´s plans to create a network of 16,000 public charging points in France.
electrive.com