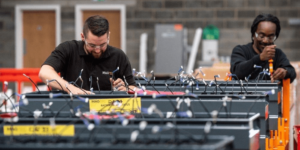 UK-based engineering firm Magtec is opening a factory for the design, manufacture and integration of its drive systems for electric and hybrid vehicles. The company has commissioned a 65,000 sq ft facility in Rotherham, South Yorkshire to scale up production and meet growing international demand for its innovative technologies.

Toyota and Honda gain support: The Japanese Ministry of Economy has revised technical standards for hydrogen filling stations, essentially loosening existing requirements. Suppliers can now use liquefied hydrogen instead of only compressed gas in their tanks and make storage units using cheaper composite materials instead of steel of non-iron materials. Moreover, the space away from public spaces required to establish a filling station was reduced.
transportevolved.com, techinasia.com

Update from South Korea: The island of Jeju hopes to be carbon and petrol free by 2030 by then replacing all 370,000 regular cars with EVs, Governor Won Hee-ryong announced. It was previously announced that 9,500 electric cars would be delivered to locals by 2019.
jejuweekly.com

A dozen EVs for German police departments: A total of twelve Volkswagen e-Golf have been delivered to police departments in the German cities of Brunswick, Hanover, Lüneburg and Göttingen, as well as the police headquarters and police academy of Lower-Saxony.
presseportal.de (in German)

80 plug-ins for London: Private hire company Openstart ordered 80 Toyota Prius Plug-in and has already taken delivery of 50 of the vehicles. They join a fleet that has added more than 60 standard Prius and Prius+ cars this year.
fleetnews.co.uk, motoringresearch.com

South Yorkshire police electrified: The police received a fleet of ten Vauxhall Ampera, to be used to visit victims of crimes or carry out inquiries. During high speed chases, they will have to stay in the garage, though. Still, the police force hopes to safe 25,000 pounds in fuel costs (39,200 USD).
thestar.co.uk

Is it time for a new Volt? At least that is what the U.S. sales figures for June could stand for. While the Nissan Leaf with 2,347 units is in its sixteenth straight month of record sales, Chevy only sold 1,777 Volts, which is 34% down from the 2,698 sales in June 2013. Still, last month was the strongest of this year for the Volt so far.
greencarreports.com, green.autoblog.com

ZAP finds bulk buyer in China: The California-based EV manufacturer has signed a strategic partnership, as well as a purchase agreement with China’s Xinri Electric Vehicle Company. The latter wants to sell 1,000 of ZAP’s URBEE via its distribution network in China – per month!
hybridcars.com,online.wsj.com

Japan to charge its capital: Starting in December, companies Mitsui Fudosan and NEC Corporation will install 125 charging points at the Tokyo Midtown, which is one of the most recognised high-rises in the Japanese capital. It is home to numerous apartments, offices, as well as shops and even hotels.
greencarcongress.com, japancorp.net

Venson Automotive to electrify South Yorkshire: The company is helping some 80 businesses in that part of the UK to switch from gas to green, encouraging employees to lease electric vehicles for their commute to and from work. The scheme is supported by Sheffield City Council and could be adopted by others is successful.
fleetnews.co.uk, fleetworld.co.uk