“We are going to increase investment, we are going to have lot of new cars coming, better batteries, better performance, lower prices.”

Renault-Nissan CEO Carlos Ghosn says the alliance remains invested in staying in the lead of the electric car market. This comes as Ghosn announced that Renault-Nissan has sold 400,000 electric cars worldwide, since the Leaf launched in December 2010.
autonews.com

“We are exploring on our electric platform all the concepts that could be done.”

Volkswagen sales and marketing boss Jürgen Stackmann says we will see two or three more concepts based on the VW I.D. in the coming months, that could make it to production after the initial VW I.D. launches in 2020.
autoexpress.co.uk

“Success of our electrified vehicles shows we are already well on track, and our message is clear. We intend to remain at the forefront of electro-mobility.”

Bike brand Specialized used the urban bike show in Berlin to present the Playboy version of its Turbo S pedelec with “bunnies” present. While one might try to explain the promotion with Easter approaching fast, visitors and fans were rather aghast then aroused by the brand’s sexist approach, esp. as it is usually known for its modern range for female riders.
cyclingweekly.co.uk, road.cc 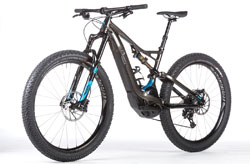 Specialized E-MTB: The American bike manufacturer will introduce an electric mountain bike range. The Turbo LEVO is powered by a modified 250-W Brose drive, but speed is capped at 25 kph. The battery is integrated in the down tube and includes three buttons for control instead of a display. The system communicates driving data from various hidden sensors and can be fine tuned via an app.
flowmountainbike.com, velomotion.de (in German)

On alert: Beijing is to keep up its car restriction rule based on odd and even license plates on days of heavy air pollution. As soon as alert level orange is called, half of the cars will be banned from the city centre, as will all trucks. Electric vehicles are obviously exempt from this rule.
eco-business.com

Record flight: After weeks of waiting, the Solar Impulse II has managed to cross the Pacific Ocean. It took five days to fly from Japanese Nagoya to Hawaii on solar power alone. The 120-hour voyage thus broke the record for a nonstop flight. The next leg will take the pioneers from Honolulu to Arizona.
eco-business.com, greencarreports.com, ev.com

Ford recalls C-Max Hybrids in the U.S., due to a software malfunction that causes engines to keep running even after being turned off. Affected C-Max models were built at Ford’s Michigan Assembly Plant between April 22nd, 2014, and June 12th, 2015.
greencarreports.com

Tuning the i-series: BMW tuner IND has developed a tuning kit to modify the BMW i3 and i8. While performance remains unchanged, the design of both cars is accentuated with blue rims, for example, while the i3 also receives a new carbon front and rear.
ecomento.tv (in German), ecomento.com

Details on Gigafactory deal: Tesla and Panasonic have agreed on the basics for the planned mega battery facility. The carmaker will be responsible for the property while the Japanese will possibly invest 20 to 30 billion yen (194-291 million dollars) into machinery. At a later date, Panasonic’s investment might go up to one billion dollars. Nothing is official yet though the formal announcement might be made tomorrow when Tesla publishes its quarterly figures.
asia.nikkei.com, chargedevs.com, greencarreports.com

Fuel cell Future: “Mirai” means “future” in Japanese and will apparently be the name of Toyota’s FCV, Bloomberg reports quoting an insider. The carmaker has not yet confirmed the name but Mirai is registered as a trademark in the U.S. already.
bloomberg.com via transportevolved.com

Specialized is committed to e-bikes and introduces two more pedelec models to join their Turbo offering. While the original Turbo S is a speed pedelec (45 kph) the new Turbo 25 and the Turbo 25 X feature very similar technology and an integrated battery but with electric support only up to 25 kph.
bike-eu.com

Special edition i8: Ahead of the U.S. launch of the hybrid sports car, BMW will present the “Concours d’Elegance Edition” at the show of the same name at Pebble Beach, California. The special i8 comes in an unique colour and with special interior and will be auctioned off at the event on August 16th.
green.autoblog.com, electriccarsreport.com

It’s all in the gearing: When Green Car Reports pitched a Chevy Spark EV against the Fiat 500e, the testers noticed that at city speeds the small Italian felt and was much quicker than its American counterpart, which has better power ratings. Chief engineer for the Fiat 500e, Brett Giem, solved the riddle: gearing, which is 9.6:1 reduction in the 500e, vs 3:1 in the Spark EV.
greencarreports.com