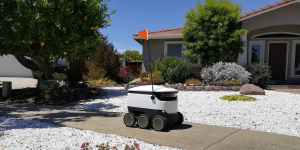 Who would kick this tiny robot?

Amongst fears that machines will take over the world, it appears as if robots may have more to fear from us than we from them. Take the tiny food delivery bots by Starship Technologies that get a kicking once in a while.

Tata shows electric buses: The Indian manufacturer presented a whole series of buses with alternative drivetrains. Next to the Starbus Electric and Starbus Hybrid, available in nine and twelve metres, Tata also unveiled the country’s first fuel-cell-powered bus. The only bad news: there are no concrete production plans.
indiatimes.com

Scotland outlines climate goals: The Scottish government announced that it wants to lower CO2 emissions by 66 percent by 2032 (compared to 1990). The climate plan also outlines that 40 percent of individual cars and transporters, as well as 50 percent of public buses will need to be electrified until then. 30 percent of public ferries will also receive a hybrid drivetrain in the next 25 years.
theguardian.com, climateactionprogramme.org

e-Golf for Japan: According to Nikkei, the German carmaker wants to introduce its EV to Japan in June or July. It would be VW’s first all-electric undertaking in the country and is also part of a move to repair its image damaged by the diesel scandal.
nikkei.com

The mothership: Daimler invested in company Starship Technologies, taking part in a 16.5m euro financing round. Starship develops ground-based, autonomous delivery robots that could be featured in Daimlers (all-electric) delivery vans in the future. A mothership concept combining the two had already been shown in September.
greencarcongress.com, roboticstrends.com

Chevrolet Bolt review: The Chevy Bolt feels a lot like a normal car at first glance, Darrell Etherington from Tech Crunch writes. “But it feels fast, and fun.” Especially when turning on the regenerative breaking, “the car’s character really starts to shine through.” Etherington concludes that the Bolt ist he first EV he would consider owning.
techcrunch.com (with video)