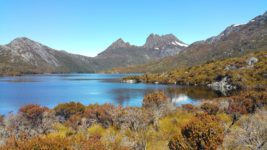 In Australia, the Tasmanian Government has launched a second Electric Vehicle ChargeSmart Grants program, providing $600,000 (AUS) for fast and destination charging stations for electric cars in regional Tasmania and at key tourism destinations.

Tasmanian government fleet to be electric by 2030

In the Australian island state of Tasmania, the state government has pledged to transition its entire car fleet to battery-electric, plug-in hybrid and hydrogen vehicles by 2030. An initiative for emission-free buses is also underway to determine whether hydrogen or electricity is more appropriate.

Plug-in Black Cabs will be mandatory from 2018 as Transport for London (TfL) has announced that licensed taxis will then need to be ‘zero emission capable’. Yet, the London cabbies will not be left alone in the endeavour to clean the air in the British capital. Mayor Boris Johnson and TfL have secured 65m pounds of funding to achieve a target of 9,000 taxis that meet the new conditions by 2020.
eandt.theiet.org, getwestlondon.co.uk

Chargers at channel: On the English side of the Eurotunnel, four Tesla Superchargers have been installed. They join two universal chargers at the Victor Hugo Terminal in Folkestone, Kent. The same installation can be found since June on the French side of the channel.
businesswire.com

The Electric Vehicle Charging Association (EVCA) was set up by ABM, ChargePoint, Clean Fuel Connection, Envision Solar, EV Connect, NRG EVgo, Plugless Power, SeaWave Battery and Volta. The collective aim of the not-for-profit trade organisation is to increase EV acceptance through innovation in charging technology. Its first action is the publication of the “State of Charge” report.
theautochannel.com, evassociation.org (State of Charge, PDF)

Isolated EV pilot: Tasmania’s government plans to launch a pilot project by the end of this year that involves 19 electric vehicles. The remote island state aims to assess the green cars potential to protect its citizens from fuel price shocks.
heraldsun.com.au

Park & Charge: The Montgomery County Department of Transportation is installing EV charging stations at five County-owned parking garages this month. Three such stations that serve two EV each were installed in other locations earlier this year with more to follow.
mymcmedia.org

EV boost in Scotland: Scottish motorists will be able to take out an interest-free loan of up to 50,000 pounds (100,000 pounds for businesses) to buy a hybrid or electric vehicle under a new fund from the Energy Saving Trust. In addition, full grant funding is currently available through the ChargePlace Scotland programme for electric car drivers to install a charge point in their home.
clickgreen.org.uk, scotsman.com

EV boost in Tasmania: Tasmania’s electric car industry is driving forward with the official launch of an electric vehicle association. Currently, there are about 120 registered EVs in Tasmania and there are plans to build up 40 to 50 charging stations in the state.
abc.net.au

Columbia electrifies: The City of Columbia, Missouri has ordered four electric buses from BYD. The first bus to be delivered in September will be a full-size 40-foot transit bus, followed by three 30-foot low floor transit buses in December.
electriccarsreport.com

New Leviton charger: Leviton unveiled its Evr-Green 320 Level 2 charging station. The device, which is capable of providing 32 amps at 208 or 240 volts AC with a maximum output of 7.7 kW, claims to display an improved installation process and to reduce the charge time of next-gen SAE J1772 plug-ins.
electriccarsreport.com

Unity decreed: France will unify electric vehicle charging within its borders, as the government plans to impose interoperability on all charging networks by the end of the year. Bollore, EDF, Renault, and others already created the Afirev association for network interoperability. The Gireve platform serves as a platform for data exchange and payments.
reuters.com

En route to reduction: Transport & Environment found Nissan to be ahead in reducing CO2 emissions of its fleet, reaching 115g CO2/km in 2014. Peugeot Citroën, Volvo, Toyota, and Daimler are also ahead of schedule to reach the 95g target by 2021. So why all the whining?
transportenvironment.org

Navy EV strategy: The Navy plans to lease about 300 to 600 electric passanger vehicles for its military corps in California. To better understand what that means, it will hold an interactive EV leasing discussion with industry partners a week from Tuesday (July 21st).
greencarcongress.com, fbo.gov (Forum)

Charging Tasmania: In a white paper, the local government suggests increasing EV uptake through incentives and in its own fleet, especially since the cars could double as energy storage. However, critics see the region lacking far behind in infrastructure.
motoring.com.au (intentions), motoring.com.au (comment)