With five fast-charging stations already open in the ChargeFox ultra-rapid EV charging network, this first phase will result in 22 stations connecting Adelaide, Melbourne, Sydney and Brisbane, with additional sites in Western Australia and Tasmania. All stations will be powered by 100% renewable energy.

Marty Andrews, Chargefox CEO, said, “We’re committed to making EV charging simple, fast and clean, and are thrilled to be leading the way in making this a reality for all Australians.”

Over the past few months, ChargeFox has also announced deals with Nissan, BMW and Jaguar Land-Rover to offer their drivers discounts on the Chargefox network. Australia is a continent characterised by vast distances between huge sprawling cities but appears to be picking up on electric mobility despite the physical challenges and numerous political obstacles. Also this month, Tesla is scheduled to deliver over 2,400 units of its Model 3 to Australia, which makes the model one of the most popular vehicles in the country. 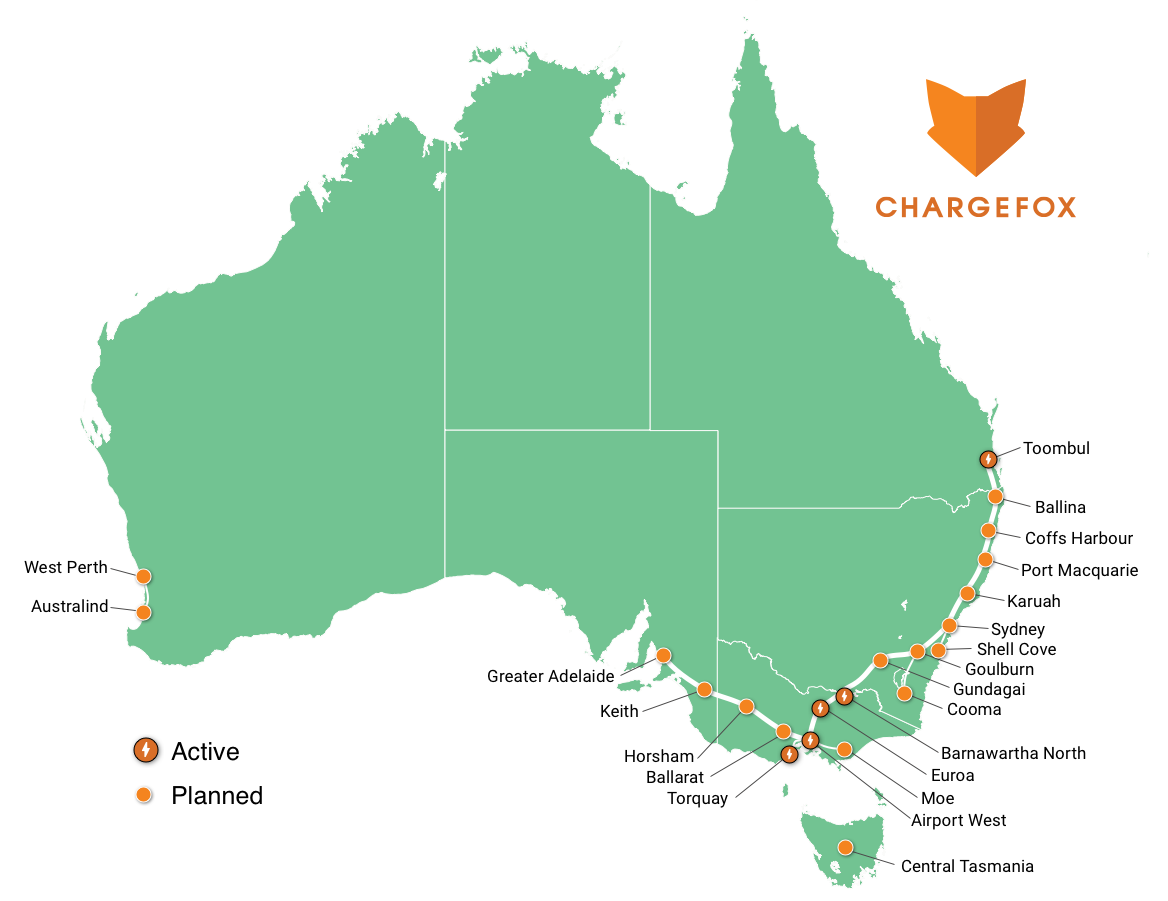 Any uptake of electric vehicles is despite rather than because of the Australian government.  In parliament, the Prime Minister, Scott Morrison claimed electric cars would ruin the Australian way of life, or the “Australian Weekend” as he put it. He mistakenly claimed that “[An electric vehicle] won’t tow your trailer. It’s not going to tow your boat… It’s not going to get you out to your favourite camping spot with your family.”

ChargeFox is not alone in forging forward with charging infrastructure for the sunburnt country. Evie Networks is also building a fast-charging network throughout Australia and is cooperating with California-based EV Connect. The 80 charging stations are to be built in the first phase. But the competition is not asleep: At the beginning of June, the Chinese start-up XCharge announced its intention to set up a network of at least 1,000 DC chargers in Australia – including several HPC stations with up to 350 kW. At the same time, Chargefox keeps moving forward.

Marty Andrews, Chargefox CEO, said, “Our plans to complete the first phase of our ultra-rapid network are well underway now. From our rapid growth over the past two years, we’re learning how drivers in Australia use EVs, and are now using those lessons in future planning to grow the network Australians need,” Andrews continued.