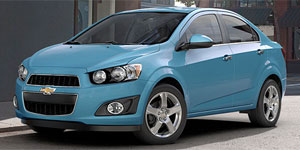 Sonic to be electrified? GM is apparently working on a new 200-mile electric car based on its Sonic model. A prerequisite for the new development will be the new battery providing said range LG Chem is developing at the moment. If all goes to plan, the Sonic EV could replace the Opel Ampera in Europe and would also be offered in the States by 2016.
thetruthaboutcars.com

New EVs by Polaris: The American company has launched a whole new line of electric light-utility vehicles, namely the e2, e6, e4, eL, eS, eL XD and eM1400. They offer space for two to six persons and are said to haul up to 1,450 pounds of payload.
hybridcars.com, automotive-business-review.com

Japanese E-Roadster: The young carmaker GLM and racing car manufacturer Tommy Kaira have electrified the sports car Tommy Kaira ZZ. The convertible will cost around 80,000 dollars and already got all the necessary approvals. While the companies want to market the EV globally, it will probably launch first in Europe by 2015.
techinasia.com, green.autoblog.com

New Fisker by 2017: Wanxiang CEO Lu Guanqiu said a new Fisker model cannot be expected before 2017. Prior to that, the New Fisker will reissue the Karma but not before having fixed about 250 bugs found in the current version of the car. Like before, the Karma will be built in Finland.
autonews.com, jalopnik.com

Audi E-tron in the UK: The German carmaker released the pricing for its plug-in hybrid in Britain. There the A3 E-tron will start at 29,950 pounds including the 5,000-pound government grant. Deliveries will begin in early 2015 while the hybrid Audi is available to order from showrooms now.
honestjohn.co.uk

Tesla to move deeper into the UK: The second official Tesla store opened in West London following the first outlet in Westfield shopping centre. The Californians have more stores planned in Crawley, Birmingham, Manchester, Bristol, Newcastle and Edinburgh which are set to open by year’s end.
thegreencarwebsite.co.uk, electriccarsreport.com