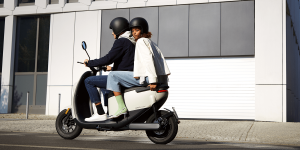 The Berlin-based electric scooter manufacturer Unu has started regular sales of the new model via its online store after completing the pre-order phase. The first e-scooters are to be delivered in October. 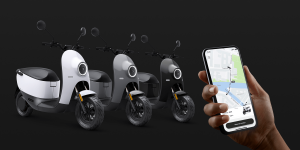 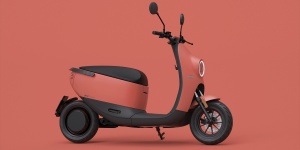 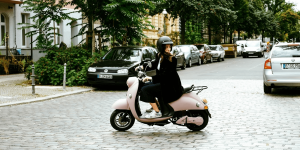 Unu has been around for a few years but can still be considered a start-up. Based in Berlin, the three boys just finished another round of financing, this time collecting 10 million euros from mostly existent investors.

Millions for e-scooter start-up: Berlin-based Unu secured 7.5m euros in another round of funding and wants to use the money to launch its electric scooters in France and the Netherlands. The circle of backers is international and includes French VC Iris Capital, Silicon Valley’s Michael Baum or NRW.Bank. Apart from the expansion, the three founders announced to be working on a new connected model. The original Unu scooter’s USP is its portable battery that facilitates charging anywhere.
gruenderszene.de (in German)

Electric trucks for charity: San Francisco Goodwill, a not-for-profit organisation, will deploy eleven electric trucks that will pick-up unwanted stuff and electronics in a bid to reduce not only poverty but CO2 emissions too. The test project involves BAAQMD, CARB, the Center for Transportation and the Environment as well as BYD. If successful, the charity may electrify its operations nationwide.
patch.com, sfgoodwill.org

Coming from down under to the UK market is Tritium with its range of Veefil EV rapid chargers. The Australian tech company has found its first UK distributor in Electric World Enterprises (EwE). Tritium believes the “small footprint” of its products may prove particularly fitting for Britain’s narrow roads.
fleetnews.co.uk, reneweconomy.com

Fastned en route to growth: The Dutch infrastructure company announced its Q1 figures. Both volume and revenue grew by 160 and 148 percent year-on-year. Client registrations increased by 62% and Fastned thus counts 3,520 active customers, or about a fifth of all EV drivers in the Netherlands.
fastned.nl

Alternative tracks are what BMW apparently wants to leave in California. The carmakers “Road to Coachella” campaign will see the i3 and X5 40e iPerformance serve as shuttles for the Coachella music festival. The i8 is reserved for VIPs, who will be accompanied by a soundtrack composed by Hans Zimmer, who delivered the score for the Dark Knight or Pearl Harbour movies.
bmwgroup.com

Another plug-in from Sweden: Volvo announced that its S90 limousine will debut in the second half of 2015. It will share mechanics and chassis as well as connectivity technology of the recently presented XC90 and will also be available as a plug-in hybrid.
motoring.com.au, leftlanenews.com

Renault to show plug-in hybrid: The French carmaker wants to present a 2-litre (117 mpg) concept car at the Paris Auto Show. It is said to build on a completely new platform. Details have yet to be released, but due to earlier announcements, a plug-in hybrid is considered as very likely.
cars.uk.msn.com, autocar.co.uk, greencarreports.com

NEVS to reorganise: A court in Swedish Vaenersborg approved NEVS’ application for protection from creditors, after first rejecting it on Thursday (we reported). The Saab-owner allegedly owes suppliers 57 million dollars. Negotiations with investors are progressing, but have yet to bear fruit. Meanwhile, NEVS lost the right to use the brand name Saab for new vehicles as well as those originally developed under that name.
greencarcongress.com, just-auto.com (reorgianisation), wsj.com (name)

EV prices reach record low in Rotterdam: The Nissan e-NV200, i.e., starts at a mere 4,950 euros, the Leaf at 7,450 euros due to new subsidies, claimed to be the best in the world. These are, however, temporary and limited in terms of number of sales. Amsterdam is offering similar bargains, combining local and national subsidies.
electriccarsreport.com, puregreencars.com

Behind the wheel of the Denza EV: Greg Kable from Autocar says the electric vehicle sets itself apart from other cars from China due to its “high standard of fit and finish.” Another positive point is its 208 mile range. With a weight of 2090 kg, Kable also criticises that the Denza is “hardly what you’d describe as quick.”
autocar.co.uk

Introducing the Unu: The electric scooter has a range of 100 kilometres and a top speed of 45 kph. It features a portable 3000-watt lithium-ion battery, which weighs only 8 kilos. That enables users to charge their two-wheeler virtually anywhere. Pricing starts at 1,699 euros (2,231 dollars).
designboom.com