Autopilot improvements: Tesla is working to adapt existing self-driving technology to improve functionality. According to Musk, engineers work on adapting the radar to make a map like lidar (visible light detection and ranging). According to Bosch, the update for the radar sensors could be send over the air. New Tesla models already come with a casing that will eventually hold a second camera.
autoblog.com (lidar), lasvegassun.com (software), electrek.co (camera housing)

World’s most efficient racer: Student of the TUfast Eco Teams from TU Munich, set a new efficiency record. Their ultra-thin, electric race trike used 81.16 KJ energy over 100 kilometres – that converts to 11,000 km on one litre of petrol.
sueddeutsche.de (in German)

Fun racer from Switzerland: Kyburz delivers details on its electric cart eRod. With Race specc, it has 150 kW of power and a weight of 650 kg, making it a powerful little thing. Stuffed with components from Swiss Brusa, it can travel over 135 miles with its 39 kWh battery. A price has yet to named.
insideevs.com 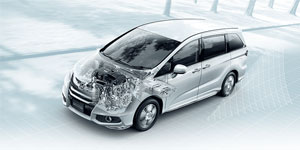 Optimised hybrid: Honda presented the Sport Hybrid i-MMD drive designed for large vehicles. It is already utilised in the Odyssey, a mini-van that just launched in Japan. The initial hybrid system is found in the Accord Hybrid and Plug-in Hybrid, but the new version is more compact and lighter.
autonews.com, allwebsolutions.net

1m dollars in funding for battery recycling comes from the U.S. Advanced Battery Consortium (USABC) to support the Worcester Polytechnic Institute in its quest to recover cathode materials used in Li-ion batteries of hybrid and electric vehicles. The recycled material is then used to make cells for PHEVs.
prweb.com