BMW FCV after 2020: The German carmaker won’t introduce its own fuel cell model before the end of its H2 development cooperation with Toyota. BMW is working on further compressing hydrogen to increase storage volume. A long-range, large H2 sedan will thus only be ready “sometime after 2020,” Merten Jung, head of fuel cell development at BMW said.
reuters.com 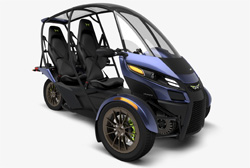 Low-cost EV market-ready: Arcimoto launched the SRK Generation 8 EV, which comes with 11,900 dollars price tag before incentives. At a top speed of 85 mph, the electric trike can go for 70 to 130 miles on one charge of the Li-ion battery that can store either 12 or 20 kWh. Reservations can be made on the company’s website.
ev.com, arcimoto.com

Cute EV-Cub: Honda electrifies its small Cub motorcycle. The EV-Cub concept features an electric motor in each wheel and a battery that sits low in the centre of the moped. The manufacturer has not yet released specifications, as the electric two-wheeler is only due to launch by 2020.
greencarcongress.com, indianautosblog.com

Swatch batteries? Belenos Clean Power, a battery maker controlled by Swatch, announced that it is considering an initial public offering (IPO). Due to the VW scandal, Swatch CEO Nick Hayek anticipates a surge in demand for EV batteries, saying that companies from China, Korea and Germany have shown interest in the technology developed with the Swiss Federal Institute of Technology in Zurich. The power packs will be tested in electric bikes, scooters, and drones next year and in cars by 2017.
bloomberg.com

A new EV factory may be build in Pennsylvania. Texas-based EV maker Velfera secured an option to buy 200 acres at Greenville Reynolds Development and signed letters of intent for further sites in other states. The company now needs to find 130m dollars to fund the construction.
meadvilletribune.com

Clarity Fuel Cell: Honda’s “Mirai fighter” will be offered for lease sale in Japan. At a later date, it will go on sale in Europe and the U.S. The Clarity Fuel Cell is on display at the Tokyo Motor Show (we reported).
indianautosblog.com