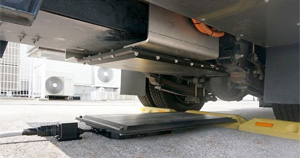 Denso tests wireless charging: The corporation will start a ten-month field test of its wireless charging system next week in Toyota City, Japan. Denso uses a Yamato delivery truck that has been equipped with a power receiver for the trial. The wirelessly charged battery is then used to power the vans refrigeration system.
greencarcongress.com, automotive-business-review.com

Nissan hybrid system updated: Details of the next version of Nissan’s hybrid drivetrain, which can be found in the Infiniti Q50, Q70, Qx60 and the Pathfinder, have just been presented at the recent SAE 2014 Hybrid & Electric Vehicle Technologies Symposium. Numerous improvements were applied, such as a 6% reduction of friction or an increased engine starting time by 20%.
greencarcongress.com

E-drive made in Britain: Drive System Design is developing a powertrain based on an axial flux motor from Yasa and a multi-speed transmission. The MSYS engine weighs only 55 kilos and could expand EV range by 10-15%, according to the company.
greencarcongress.com, thegreencarwebsite.co.uk

Missing 500,000 dollars are what keeps the Kenguru company from jumpstarting production of the ‘Equal’ EV. The little low-speed EV was designed with easy access for wheelchair users in mind but financial as well as technical difficulties have delayed the project so far.
green.autoblog.com