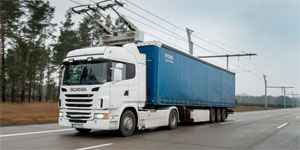 Scania tests electric trucks: The Swedish carmaker is trying out different methods of charging with electric trucks. At the Siemens test track in Groß Dölln, Germany, the EV is charged conductively via pantograph and overhead wires, while in Mannheim, Germany, Bombardier installed a 200 kW-inductive charging system.
scania.com

Connected, urban & electric: AKKA technologies unveiled its link&go 2.0 platform in Geneva earlier this month. The electric car is a concept of an autonomous-driving car which is connected to the cloud and social media platforms to encourage car pooling.
designboom.com

The ultimate e-bike? American manufacturer M55 claims to have built the fastest electric bike to date. The ‘Terminus’ features a 2,000 Watt motor that can bring a pedaling rider up to a speed of 75 mph. The battery is said to last for 50 miles and to be 80% charged in just an hour. The price for the Terminus starts at 27,000 euros (38,000 dollars).
cleantechnica.com, youtube.com (video)

French research institute: The French VeDeCoM Institute announced its launch as ‘Energy Transition Institute.’ It will look at new transport in terms of electrification, connectivity and user-vehicle relationships. PSA and Renault are among the ten founding members.
ifpenergiesnouvelles.com, greencarcongress.com