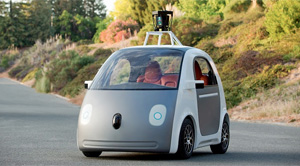 Google introduces autonomous EV: Google surprised the automobile sector last week – and us as well. The internet giant presented its first vehicle prototype – a two-seater without a steering wheel or pedals. A push of a button is enough and thanks to cameras, sensors, and complex software, the car can navigate on its own. Purely electric, of course.
Read our special report: electrive.com

Futuristic delivery van: Germany University RWTH Aachen developed an all-electric van as part of the DELIVER (Design of Electric Light Vans for Environment-impact Reduction) project, funded by the EU. The stylish prototype, which was built by Liberty Electric Cars, is currently on display at the FISTA World Automotive Congress in Maastricht, Netherlands. The modular van is said to have 120 kilometres range and can take a payload of 700 kilos. It is not due to enter the market before 2020, however.
technologicvehicles.com (with video), greencarcongress.com, greenpowertrain.automotive-business-review.com

DeltaWing four-seater concept: A new rendering shows an arrow-shaped vehicle, which DeltaWing claims to be a road and not a race car concept. While the company hopes to license the platform to carmakers, its strong resemblance to Nissan’s BladeGlider and a pending lawsuit regarding such licensing, makes its timely realisation somewhat unlikely.
autoblog.com

Flaws in BMW security? Security expert Ken Munro has revealed shortcomings in the i3 and other car’s security systems concerning the iRemote-App and the ConnectedDrive portal. While Munro admits that the Bavarians have put more thought into their system than Tesla, improvements should be made with regards to predictability of user names. BMW said the information has been sent to Germany and will be addressed.
theregister.co.uk

Plug-in sales in Europe and Japan.