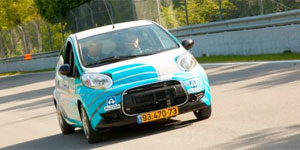 1,600 kilometres all-electric range, promised Phinergy and Alcoa with their aluminium-air battery (we reported). Now, both companies announced they will demonstrate the technology ahead of the Formula 1 Grand Prix in Montreal, Canada. The key to the aluminum air’s high energy density is its construction. But technology is still at test phase.
hybridcars.com, transportevolved.com

Electric car for Africa: Students of Munich’s Technical University are developing an electric vehicle with an extra-large loading area, designed to meet demands of Africa’s rural areas. If everything goes to plan, the ‘Africar’ could enter production within the next two or three years.
merkur-online.de (in German)

Audi ready for Le Mans: The German carmaker successfully completed 248 laps with its R18 e-tron on the Le Mans course ahead of the race. The racer survived 2,405 miles faultlessly and all eight drivers got a chance to get acquainted with the vehicle. Albuquerque and Bonanomi finished within 3m 23.799s and came in third in the overall test rating, just behind Toyota.
hybridcars.com