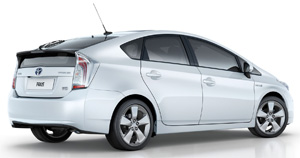 Next generation Prius delayed six months: Toyota pushed back start of production from spring to December 2015. Though reasons for the delay have not been confirmed, rumour has it that engineers need more time to optimise fuel efficiency, tweaking body and chassis issues. Moreover, Automotive News reports that the Prius will “be a test bed of critical new technologies, including Toyota’s modularised vehicle architecture and next-generation hybrid system.”
autonews.com, hybridcars.com, autoevolution.com

3rd gen Mazda2 to be hybridised: The carmaker will most likely offer the upcoming model as a PHEV, including the rotary-powered range-extender technology used in the current prototype. The news was reported by an Australian source, in which the author notes that Mazda is sure to not introduce its electrified vehicles Down Under as long as the country does not offer subsidies. Instead, the upcoming Mazda2 will most likely only be available in Japan.
motoring.com.au

BIZMO II hits the road: As of today, Japanese company Terra Motors offers its commercial motorcycle with a range of 150 kilometres. That is three times as much as current competitors. The BIZMO II can carry a load of up to 33 kilos, making it especially attractive for delivery business and costs only one-tenth of what it costs to operate a petrol-fuelled motorcycle.
techinasia.com

Double win for Mitsubishi at Pikes Peak: The carmaker took home first and second place in the Electric Modified Division of the 2014 edition of the Pikes Peak International Hill Climb, as well as finishing second and third overall. Drivers Greg Tracy and Hiroshi Masuoka both started in an iMiEV Evolution III all-electric racecar, featuring a 50 kWh battery. The race is, however, overshadowed by the unfortunate death of Bobby Goodin, who crashed his motorcycle just after crossing the finish line.
greencarcongress.com (Mitsubishi), gas2.org (Goodin)

Kick-off in London – Formula E wants to shape the future.