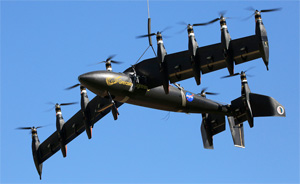 Vertical-takeoff plane: NASA is testing its GL-10 Grease Lightning hybrid-electric plane to see if it could one day transport passengers. The unmanned plane has swivelling wings with ten electric motors, which get their energy from two diesel engines in the back of the vessel.
extremetech.com, nasa.gov

Battery breakthrough? The Michigan start up Sakti3 says its solid state cells with liquid electrolyte would soon offer a capacity of 1,100 Wh per litre, which translates into a 480-mile range when compared to the battery of a Tesla Model S. As if that would not be sensational enough, the company further believes it could bring down cost to 100 dollars per kWh.
gigaom.com, scientificamerican.com

Race cars powered by algae: Formula E has come to an agreement with Aquafuel. The British company will deliver generators to “fuel” the racing series electric cars with electricity gained from glycerin produced from salt-water algae.
businessgreen.com

Start and lock via smartphone: The next Tesla update for the Model S will enable its owners to not only unlock but even to start their electric luxury car with their mobile phone. Among other new features, software version 6.0 will now include navigation with real time traffic data.
9to5mac.com, transportevolved.com

Most clicked link on Thursday was the unveiling of NEVS’ electric Saab 9-3 EV prototype with a range of about 200 kilometres.
news.cision.com