It is no small goal the Bolloré Group has set for itself. In the coming four years, it wants to more than double the number of charging points in France, installing 16,000 new ones across the country. It was already known that such a project had been presented to the French Ministry of Economy, but the name of the operator was only now made public.

“This project is a new stage for electric mobility in France,” Economy and Finance Minister Emmanuel Macron told French media, adding that “through a private initiative with public support, we are accelerating our route towards having a truly national network of electric car charging points.”

Bolloré wants to invest a total of 150 million euros over the next four years, installing the charging points successively across the country. CEO Vincent Bolloré said on French radio that the stations would never be further than 40 kilometres apart. 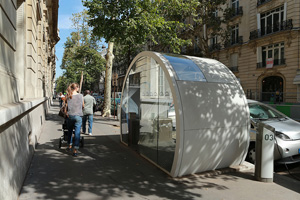 Thanks to legislation adopted in August, private operators are now allowed to construct charging stations on public territory and French utility EDF (Energie de France) had voiced their interest in realizing a similar project. At the end of January, the Economy and Finance Ministry will announce, whether the Bolloré project will be allowed to go ahead or not.

According to the energy transition law, which is still being debated by government, France wants to have a total of seven million charging points online by 2030. At the moment, there are only 14,000, with some 4,000 located in Paris as part of the electric carsharing scheme “Autolib.'”

Bolloré manufactures the “BlueCar,” the all-electric and sole vehicle employed in the programme in the French capital and its suburbs. It kicked off in December 2011, and now, nearly 3,000 of the small EVs are on the road there. The scheme was expanded to Lyon-Villeurbanne and Bordeaux in France at the end of last year and to Indianapolis in the U.S. in May 2014.
lemonde.fr, challenges.fr, automobile-propre.com (articles in French); france24.com (in English)