The Geneva Motor Show is the first European automotive highlight of the year. Our editor Carla Westerheide was on site and took a closer look at five electric mobility highlights from Audi, EVTEC, ED Design, Volkswagen, and NanoFlowcell. 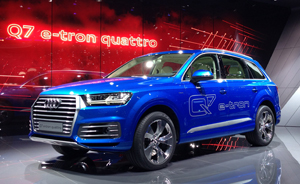 Audi unveiled a total of three new (partially) electric cars in Geneva – the fully electric R8 e-tron and the Q7 e-tron quattro and Prologue Avant plug-in hybrids. The R8 supercar was already in the pipelines in 2009, and finally made it on stage. Its 92 kWh battery delivers a 280 mile driving range. The plug-in variant of Audi’s Q7 also had its world premiere. The diesel-electric SUV has an all-electric range of about 35 miles. Meanwhile, the Prologue Avant was expected to be shown with inductive charging technology. While that was not the case, the carmaker did confirm that the model will be offered with a plug-less charging option when going into production. 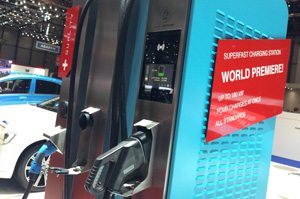 The Swiss firm brought its new “espresso&charge” to the Motor Show. The rapid-charging station features all three standards – Type 2, CHAdeMO and CCS. The maximal charging capacity of 180 kW can be divvied up enabling up to four electric vehicles to charge at the same time. Moreover, the Power Units are scalable and can be adjusted to meet local market needs. While the charging capacity is a lot more than what EVs and chargers can support today, EVTEC sees the “espresso&charge” fast-charger as ready for the future. 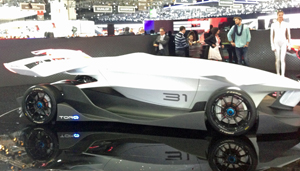 The Italian company took the wraps of its fully electric autonomous racer Torq. What stands out right away is that the car has no windows, not even at the front. Instead, the concept car is equipped with cameras on the outside and a 360 degree monitor on the inside that, according to CEO and Design Director Michael Robinson, allows for a more complete view of the surroundings, than just looking out of the windows. Four electric engines supposedly provide 1800 Nm of torque, also giving the car its name. Robinson told electrive.com that he plans to take the race car to the Le Mans. 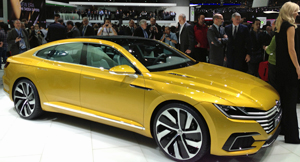 Volkswagen presented its new plug-in hybrid Sport Coupé Concept GTE to the world. The hybrid drivetrain combines a V6 TSI engine and two electric motors, giving the car a total outpot of 380 hp. The car has an all-electric range of up to 50 kilometres and the electric motor in the rear and an “electric propshaft” can distribute drive power to an all-wheel drive. Volkswagen also says that this car speaks the company’s new design language: “It bristles with dynamic.” 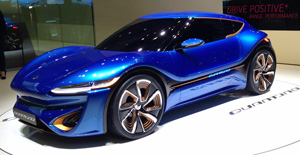 NanoFlowcell premiered its Quant F and a pre-production version of the Quantino in Geneva. The flow cell technology supposedly gives the former a range of 800 kilometres, while the latter is said to run for more than 1,000 kilometres on one charge. The company is putting on a brave face. But despite an impressive stand with videos of the Quant F’s first drive through Zurich playing as a backdrop, there is still a lot of skepticism among visitors, if this is all really possible. Either way, a NanoFlowcell spokesperson said that the performance of the car’s would be geared down for customers.