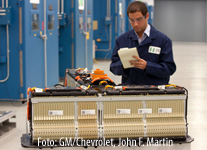 Volt battery gets 2nd life: General Motors is employing five used batteries from the Chevy Volt to store energy from solar and wind power to supply its ‘Enterprise Data Center’. The demonstration project is to be the start for a series of tests together with partners, not unlike what Nissan just started doing.
greencarcongress.com, freep.com, detroitnews.com

Tesla seeks expertise: To further decrease costs of its batteries, the Californian carmaker has employed Jeff Dahn as an advisor, media reports. He is recognised as one the leading developers of lithium batteries. In return for his services, Tesla is to sponsor his research activities.
marketwatch.com, wsj.com (after registration)

Expert poaching resolved: Apple and A123 Systems have settled a lawsuit that accused Apple of poaching talents from the battery maker thus violating non-compete clauses. The case had fuelled rumours about Apple working on an EV. For what terms the two parties settled in the end is confidential.
pcworld.com

A total of 4,761 automotive-related patents from Apple, Google, Samsung, Tesla and Uber from 1990 to 2014 were counted by Forbes. Surprisingly, 3,094 are held by Samsung that added 632 in 2014 alone, including a very large interest in battery and fuel cell technologies for next-generation vehicles.
forbes.com

Most clicked link on Wednesday were the pictures of the undisguised 2016 Mitsubishi Outlander PHEV captured in Japan.
worldcarfans.com