BMW i technology for e-bikes: The new electric bike brand HNF Heisenberg by Grace founder and developer of the Smart pedelec makes use of patented BMW i technology for its MTB XF1. The drive unit swing arm enables the mid-motor to float freely, thus getting rid of the chain tensioner and making way for a belt drive and full suspension.
press.bmwgroup.com 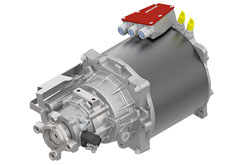 Funding opportunity: The U.S. National Science Foundation (NSF) announced its plan to issue a funding opportunity for the award of more than 13 million dollars to support engineering research looking at production and storage of electricity, therefore including better battery systems.
greencarcongress.com

iCar development accelerated? Apple plans to increase its R&D budget by 1.5 billion dollars this year. Speculation is ripe that some of the money will be used to speed up the company’s electric car project.
bidnessetc.com