iCar close to reality? Apple’s project Titan seems to be moving ahead more quickly than originally believed. The Guardian claims to have documents showing this project is actively seeking to use a special facility to test autonomous tech. According to the report, Apple already has a self-driving electric car “almost ready for the road”!
theguardian.com 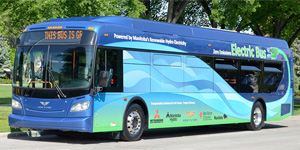 Fuel cell bus demonstration: New Flyer announced that the California Energy Commission has approved a 2.1 million dollar grant to conduct a demonstration project involving a New Flyer Xcelsior electric transit bus with a Hydrogenics CelerityPlus fuel cell. The demonstration bus will use a Siemens ELFA electric drive motor for propulsion and the Hydrogenics fuel cell as a range extender.
fuelcellsworks.com

Maintenance costs: Some Toyota hybrids are capable of saving up to 1,000 euros in maintenance after three years, according to research conducted by Tec-RMI. But the Toyota Auris Hybrid and Lexus IS 300h were in fact the only hybrid models generating savings for their owners. Other brands’ hybrids ended up costing more than their diesel and petrol counterparts.
automotiveworld.com