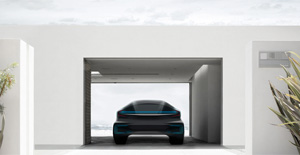 Tesla gets competition: Faraday Future says it will invest 1bn dollars in a factory to build its first electric car by 2017, quickly followed by more models. The facility’s exact location will be revealed in the coming weeks, but will definitely be in the U.S. (we reported). The California start-up is backed by Chinese billionaire Jia Yueting and counts numerous EV professionals in its ranks. The company says it thinks of EVs as smartphones that drives revenue via subscriptions for connective services.
bloomberg.com, greencarcongress.com, prnewswire.com

Push for EV producers: China is about to approve production licenses for electric carmakers, a first since 2009. More than ten manufacturers applied. Back in March, the government encouraged internet firms to look into EV development, if they are now among applicants remains to be seen.
bloomberg.com

Daily Electric update: Iveco launches a new version of its electric van with an improved battery at the Ecomondo show in Rimini, Italy. The new Daily Electric has a said range of 280 km. Battery life has been extended by as much as 20 percent, while payload capacity increased by around 100 kg.
commercialfleet.org

Detroit Electric shuns U.S.: Despite its name being based on an old American carmaker and the once proud Motown, the EV maker will not be selling its SP:01 in the U.S. The Lotus-based racer is produced in a UK facility and while shipping is no problem, airbag regulations in the U.S. are.
bbc.com via insideevs.com