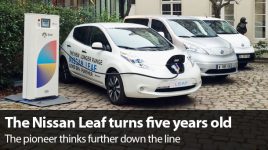 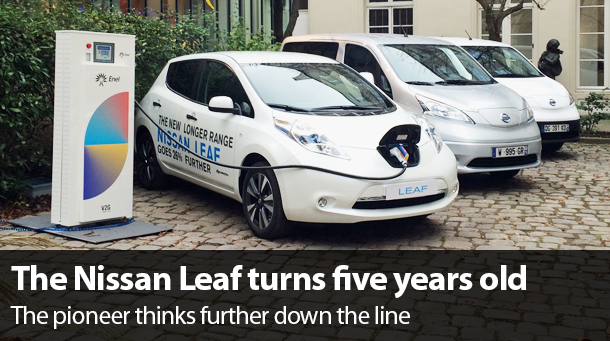 Some 200,000 Nissan Leaf will have been sold in January. Last week, Journalist from across Europe were invited to celebrate the EVs fifth birthday in Paris. Five years old – that means the Leaf is soon ready to head to elementary school. Or in other words: the electric car is slowly growing up. That raises all new questions, since in the case of EVs, the real fun doesn’t start till after the production. For Nissan, it is reason to put on its thinking cap and ponder new business models and alliances.

No, five years down the line, the Leaf’s design still doesn’t stir up any emotions with European contemplators. That is why the carmaker is spitting out lots of number and figures at the media event at the COP21 in Paris. They are broadcast on series of screens to make one thing clear: Nissan has accomplished something! Leaf drivers have completed over two billion kilometres, saving 328,482 tons of CO2. You definitely have to recognise Nissan’s work as an EV pioneer, even if compared to Tesla, the figures are presented in a more sober manner – almost under value. Typically Japanese, one could say.

LEARNING BY DOING – AND LOTS OF EXPERIENCE

Presentations, debates, and background talks show confidence. And that comes first and foremost from experience. Look, we have been building electric cars for five years. Look, we are producing our own batteries at three different locations. Look, we have helped install thousands of charge points worldwide. “We filled the gap,” Robert Lujan repeats more than once. The Division General Manager Global EV Operations here outlines the current strategy: learning by doing instead of complaining and waiting. Nissan simply solved the chicken-egg-dilemma for itself. And talking to Lujan, it becomes apparent how difficult these kinds of decisions must have been for the manufacturer. Setting up the own battery production line? Or the own charging infrastructure? These debates are enough to fill a whole conference in Germany. But Nissan is long looking further down the line: bi-directional charging technology is the future. A second use for EV batteries is also becoming more important – reason enough to already develop concrete product ideas. 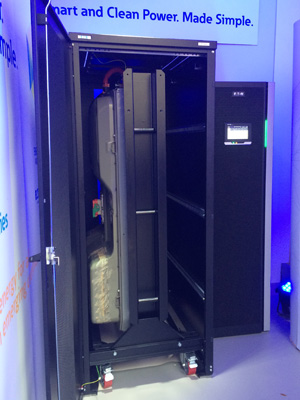 Still, it seems as though Nissan is yet not certain where in this electrifying world a carmaker should position itself between fleet vehicles and boring infrastructure. That is why the Japanese will first work with partners on future business ideas. In the case of vehicle-to-grid technology, Italy-based utility Enel will market smart solutions. The Irish-American company Eaton has gotten board for energy storage. Their demonstration project on display in Paris is already working: but simply placing the old Leaf battery upright in a huge cupboard and adding a second such contraption for the needed power electronics seems almost, well, too simple to work. Don’t worry, says Jonathan Hart from Eaton Power, this is just for pilot projects. The energy storage-control package, said to enable customers to regulate their energy use with or without being connected to the power grid, will get a makeover before hitting the shelves. For Nissan’s sake – let’s hope so.

FROM THE BIGGER PICTURE TO PLUG-AND-PLAY

In Paris, Nissan has to ask itself fundamental questions that keep all auto makers ready to venture into the EV business up at night. Before, when selling vehicles with combustion engines, buyers would return on a regular basis for an oil change or a new set of tyres. What a beautiful world! In the case of electric cars, the possibilities after sale are nearly endless. But who is in charge of all that? Will the suburban car dealer explain that a Nissan Leaf can power a home for up to two days? And will he sell and install the needed infrastructure? Currently, it is already a big deal when a car dealer no longer talks about “hp” or “filling up” when selling an EV. It’s interesting to see how manufacturers deal with these questions – and all without already knowing the right answer. It is similar to software development for smartphone apps: beta versions are the norm, since there is no way around it. Nissan Europe CEO Paul Willcox talks about “the bigger picture,” meaning that the auto and energy industry will soon have to work “hand in hand;” a paradigm shift for Willcox. And it of course has to be plug-and-play for the customer.

Almost more important: how will the electric mobility’s journey continue with the vehicle? Nissan keeps referring to “balance,” meaning that the size of the battery and charging infrastructure will continue to evolve side by side. The Nissan Leaf is the only compact EV offering a 30 kWh battery pack in 2016 and the 60 kWh battery is in the pipeline. Then what about plug-in hybrids, of which so many keep hitting the streets here in Germany? “All-electric is the way to go,” says Robert Lujan, but without excluding the possibility of a range extender. And reading between the lines it becomes clear – Nissan doesn’t have petrol but electricity running through its veins. One thing is certain, the global EV manager will always keep an eye on the customer: What are they doing with the vehicle? When do they charge? How are they driving? The other eye is looking at the market: Even when the Japanese charging standard CHAdeMO long seemed the best option for Europe, a Nissan Leaf with CCS is not out of the question. That of course also has to be read between the lines, as no one openly talks about the possibility. But when EV drivers in Europe will be able to charge more quickly and are more flexible using CCS, then the Japanese may make a more pragmatic decision.

THE SEED IS SOWN

Honestly, it’s difficult to make sense of the Nissan event in Paris. New partners, lots of ideas, the beta modus as norm. In short: the electric car is ready for its first year of school and to grow up. And it becomes clear that Nissan is predestined to help shape every of the EV ecosystem they talked about so much in Paris. Experience makes it possible. The key will be staying in the lead now that other carmakers such as Volkswagen are betting on electric mobility. But in terms of design, Nissan may still have room to improve…