Samsung focuses on batteries: 3bn won (2.5bn dollars) will be invested to expand Samsung’s electric car battery business over the next five years. The company secured the funds by selling its chemical unit. Three bases will be established, including in Xi’an, Ulsan, and Europe.
english.hankyung.com 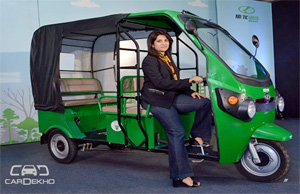 Electric trike: Together, Indian Kinetic Green Energy and Power Solutions present the Kinetic Safar. Uttar Pradesh ordered 27,000 units to improve public transport. The electric tricycle can carry up to 4 passengers with a speed of 25 kph over 115 miles on its batteries by Exide.
cardekho.com, economictimes.indiatimes.com, business-standard.com

Fuel cell advances: Researchers from universities in Germany, China, and USA have built a highly efficient catalyst for fuel cells that works without noble metals. The scientist used a layer of graphene oxide and then applied a so-called polyoxometalate (POM). This POM serves as catalyst and the group claims efficiency to be even higher than that of a standard platinum catalyst. Meanwhile, teams at Helmholtz-Zentrum Berlin (HZB) and at the TU Darmstadt have come up with another low-cost catalyst. It is made of iron-nitrogen complexes (FeN4 centres) in the carbon structures that ensure an catalytic effect approaching that of platinum.
jacobs-university.de (graphen oxide), idw-online.de (graphen centres, in German)