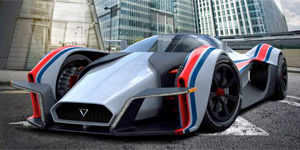 Supercar from Singapore: Vanda Electrics teamed up with Williams Advanced Engineering to develop an electric supercar. Dubbed Dendrobium, the racer is set to launch in Geneva next year. Equipped with a light battery pack, the EV aims to go from 0 – 100 km in under three seconds. The first model alone has a budget of 10m dollars and Vanda Electrics plans to also include an electric truck and e-bike in its line-up.
straitstimes.com

Autonomy unlimited: The newly launched OmniSteer aims to increase manoeuvrability of electric cars with in-wheel motors. KIT, Schaeffler, Paravan and Hella will jointly look into concepts and prototypes until 2018. The project is funded with 3.4m euros from Germany’s Ministry of Education and Research.
idw-online.de, greencarcongress.com

Panasonic production in China: The Japanese firm has entered in a JV with Dalian Levear Electric, as it is looking to set up production of automotive batteries in China. Assemblage will begin by 2017, with power packs are destined for “eco-friendly” vehicles, meaning electric and hybrid cars.
automotiveworld.com