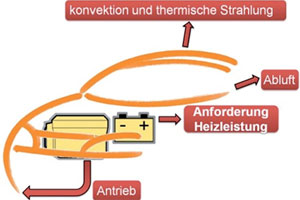 More range with efficient heater: As part of the joint research project GaTe, Mahle, Daimler, Bosch, et al. looked at “integral thermo-management of electric vehicles.” They found that coolant-heat pump and more circulating air will make a car’s heater more efficient. At freezing temperatures, range could be increased by 33 percent in city traffic.
automanager.tv (in German)

Battery anodes from CO2: Researchers from George Washington and Vanderbilt University were able to able to demonstrate a process that replaces graphite electrodes in batteries with carbon material from the atmosphere. An EV would thus not only have zero emission, but even clean the air.
vanderbilt.edu, greencarcongress.com

iCar production site found? The Silicon Valley Business Journal reports that Apple has rented a nearly 9,000 square metre facility in Sunnyvale, which according to the paper could serve as a location for the production of an Apple car. Meanwhile, Fiat Chrysler CEO Sergio Marchionne himself offered to partner on the project.
businessinsider.de, ibtimes.co.uk (Fiat Chrysler)

Autonomy in sight: The IED Istituto Europeo di Design and Quattroroute have presented the futuristic design concept Shiwa at the Geneva Motor Show. The autonomous car has no windows, but four electric motors.
worldcarfans.com (with video), carscoops.com