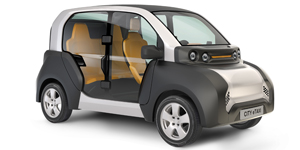 eTaxi from Adaptive City Mobility: The Adaptive City Mobility project, funded by the German Federal Ministry for Economics and Energy, unveiled the final design of their lightweight CITY eTaxi. The small EV comes with a newly developed battery swapping technology, meaning it will not need time to charge.
adaptive-city-mobility.de, pressebox.de (battery swapping, in German)

Faraday driverless tech tests: California-based start-up Faraday Future is seeking to test their self-driving vehicles on the roads in Michigan. The company has applied for three manufacturer license plates, a prerequisite for testing on Michigan roadways, and is currently testing both mechanical and software systems.
detroitnews.com

3D Printed Electric drone: Airbus showed off their new 3D printed drone “Thor” at the 2016 International Aerospace Exhibition and Air Show in Berlin. It is made of 50 3D printed parts and two electric engines. Testing began in November 2015, and there are 18 more test missions planned for 2016.
rt.com

Scooter kick started: The SnikkyBike is an electric scooter currently looking for financing on crowdfunding platform Kickstarter. It has one full-sized 700C bicycle wheel in the front, one 16-inch motorised wheel in the back, and is driven while standing (it actually has no saddle). The inventor is seeking 100,000 dollars and is already halfway there.
gizmag.com, kickstarter.com (crowdfunding, with video)