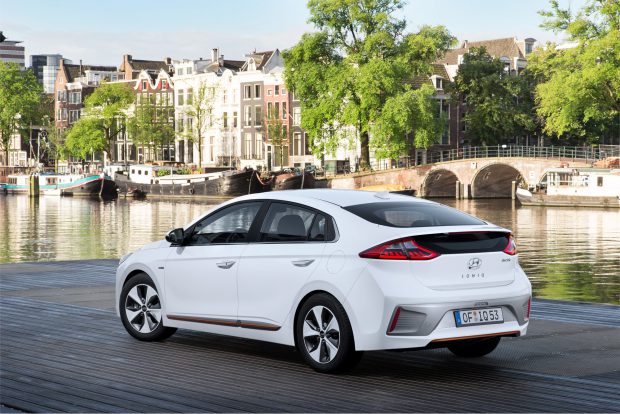 There’s a new competitor in the battery-electric segment: the Hyundai Ionic electric. We welcome it with open arms, since the selection for BEVs continues to be too slim and every newcomer deserves a round of applause. And we are happy to report that the Ioniq turned out well – it’s inherently consistent, efficient and well manufactured. And it shows what level Hyundai and Kia have reached, namely one quite high up – with ambitions to make it to the very top.

The Ionic electric and the petrol-hybrid variant will arrive in European showrooms in early November. The plug-in version won’t be for sale in these parts until October of next year. It starts from 33,300 euros of 28,995 pounds in the UK. On top of that, it will of course qualify for EV incentives in countries like Germany, the UK and Norway.

The money will buy the customer a 4.47 metre long hatchback sedan that was officially inspired by the Toyota Prius, but whose design doesn’t polarise quite as much. Under the hood, it features an electric motor with 88 kW (120 hp). It can reach a maximum torque of 295 Nm and go from 0 to 100 kph in about 10 seconds. Maximum speed it capped at 165 kph. 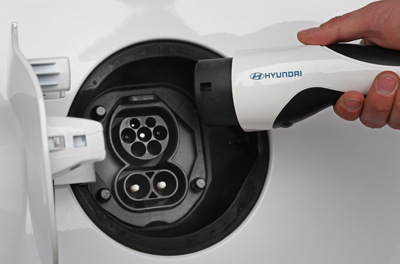 But what interests us EV fans the most, are the battery pack and charging possibilities. The LG battery pack has a capacity of 28 kWh and an eight-year-warranty for 200,000 km (125,000 miles). Charging time at an AC charger (6.6 kW) is listed at 4.5 hours, while the battery can be recharged 80 percent in just 33 minutes at a DC charger (50 kW). Other than fellow affiliate Kia with its Soul EV, the Hyundai Ioniq electric has a CCS inlet. That is why the fact sheet also lists a charging time at 100 kW: 23 minutes to 80 percent.

And here are some more figures: the drag coefficient is cd 0.24, though Hyundai does not give any specifications for the front end. Curb weight according to EU standard (including a 75 kg driver) is 1,495 kg; all good preconditions for an efficient car. 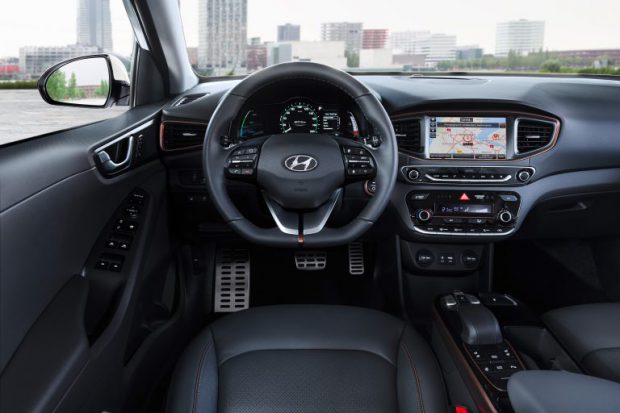 The average economy during our 100 km drive in and (mainly) around Amsterdam was 13.1 kWh. That is more than the 11.5 kWh per 100 km according to NEFZ, but is still not bad. But we have to say that driving conditions were excellent. Seldom let us the set route through city traffic or along high speed motorway (yes, even in the Netherlands you’re allowed to drive 130 kph at times). Moreover, the roads are smooth and the driving style is much more relaxed than in say Germany. It becomes evident why so many carmakers choose to present their green vehicles here.

Range according to NEFZ is 280 km – but will (as usual) be lower in the real world than in a lab. So potential buyers have to know or test their individual driving style.

The Hyundai Ioniq itself is a success and the manufacturing top quality. And yes, it’s very quiet and nothing rattles. The controls are user-friendly and the seats are comfortable. You’re almost gliding along. If the low-resistance tyres were to roll off more smoothly, this EV would have gotten an A+. 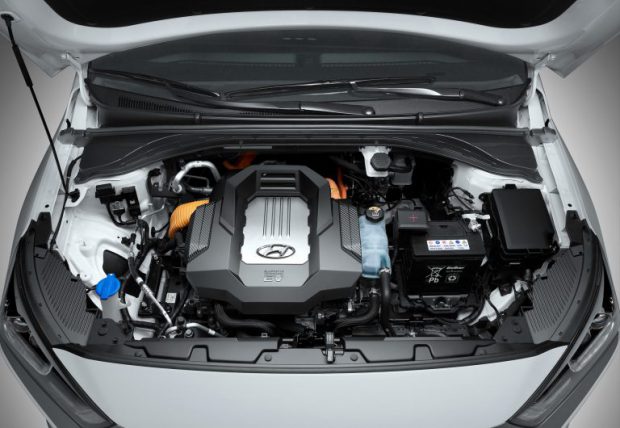 The Advanced Cruise Control, short ASCC, comes standard. It is an adaptive cruise control that keeps the distance to the car in front, will come to a complete stop if needed, and will only need a tap on the “gas” pedal after a waiting period of more than five seconds. It is a delightful fact that this technology has become a given in many new vehicles.

What else? Recuperation! It can be set to four different levels (0 to 3) using compensators on the steering wheel. Level 0 – rolling – is the most fascinating. Just like with the e-Golf, it is baffling how far a car can go when you just let it roll.

HYUNDAI ON THE WAY TO THE TOP

There are a few reasons why we chose to report on the Hyundai Ioniq electric. First off, because it is one of the only actual newcomers on the EV market, and also because Hyundai-Kia is especially keen on making it to the top. In terms of numbers, they want to take on the big three (VW, Toyota and GM), while with some eight million units sold in 2015, they just made it to rank five. Officially, Hyundai is eyeing to take on the Toyota Prius, even though there is no all-electric version. And while there are no official figures, one can assume that profit per vehicle is still relatively high.

German carmakers know that and take Hyundai serious. And of course engineers at the press conference radiated with confidence. They are proud of their product – and have every reason to be.

We like the Ioniq electric so much that even the hybrid variant couldn’t convince us otherwise. It hums, the dual clutch transmission shifts, and it gets noisy when you really step on it. No, seriously, everyone with a compatible driving style and deep enough pockets should pick the all-electric version.

We are anxious to see what will head our way from South Korea in the near future. With LG Chem and Samsung SDI, the country already has two of the best suppliers at hand, who are probably looking forward to adding capacity without increasing battery size. And right now, it’s important to even have a BEV in the portfolio. You’ll recognise this electric variant by its closed grille and copper applications.