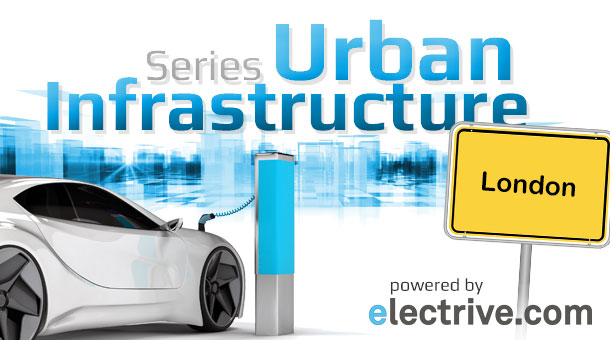 How do electric cars get cleaner energy and cities better air? The series Urban Infrastructure from electrive.com highlights the different strategies with which cities in Europe develop infrastructure for electric vehicles. After Hamburg, Stuttgart and Berlin electrive.com Editor Nora Manthey takes a critical look at charging infrastructure and transportation in London, the capital and most populous city of England and the United Kingdom.

Transport is moving in London, slowly at times, but move the British capital must by all means. Mobility is of the essence in a place that hosted 31.5m tourists in 2015 and has about 850,000 commuters flocking to the city every week day. A stand still is a disaster. Congestion is as pressing a problem as air pollution, and London keeps failing to meet EU standards.

“Make no mistake: London is in the midst of an air quality crisis. Air pollution is permanently affecting children’s lung development and nearly 10,000 Londoners are dying early every year due to the long-term exposure of London’s dirty air.”

Both the UK government and the recently elected Mayor of London, Sadiq Khan, pledged to tackle the issue and put electric transport high on their agenda. The commercial level too, is taking an electric approach as initiatives like the sole EV charging network Source London experience new ownership.

Yet, London poses many a challenge to any concerted (electric) transport action due to its structure. Infrastructure here is a matter of public and semi-public transport as much as it is of private cars. All forms are increasingly electric – or shall become – but have to meet peculiar challenges in the British capital.

How do EVs do in London?

The Big Smoke has a longstanding relation with electric cars. The UK used to be Indian Reva’s biggest market for its G-Wiz electric micro car, or quad rather. While just 4,600 units were sold worldwide, they did so from 2001 when not many EV were available. The EVs (limited) appeal was that it was small enough to have a chance for parking and it saved fuel cost in a high-price environment.

Today, the green aspects of electric mobility may weigh more because traffic and thus pollution from both particles and noise is high and feasible. Still, arguments for electric cars take a mainly financial stand in Britain, promoting cost savings on fuel and other charges as well.

At the same time, more plug-in models have become available and the British government incentivises their acquisition and charging infrastructure, too. 18 fully electric cars are listed as eligible for the plug-in grant of up to 4,500 GBP. Add to that another 13 plug-in hybrid models available and it makes a respectable market. Plus, the UK government earmarked 38m GBP for public charging infrastructure and supports the installation of a private EV charger with 500 pounds each.

“An average trip of a Londoner is 6 miles but takes 30 minutes also because it often includes walking or public transport. The proportion of trips by car is London is lower (40%) than in the rest of England (60%).”

Some will still drive their private car in London despite congestion. Most car trips in London are shorter than ten kilometres, a distance any electric car could manage easily. The rising cost of operating an ICE make plug-ins an increasingly attractive choice and sales reflect that. There are 4,321 fully electric cars registered in London with another 2,521 plug-in hybrid and 647 range-extended vehicles joining the club, according to SMMT figures from 2013 to 2015 provided to electrive.

From 2013 to 2015 the number of EV registrations in Greater London rose from 505 to 2511, a fivefold increase and further growth is expected. But with EVs gaining a fair share of the market, another issue intensifies – EV charging. Three-quarters of parking spaces in London are on-street and the scarcity of drive ways or garages means that drivers of plug-in vehicles rely on public charging stations.

“There are about 1,850 EV charge points in London at 1,022 locations. This includes offers by Polar, Charge Your Car, Source, and Zero Net. The London stops account for 15.5 % of all charge points in the UK.”

EV charging is a structural issue in London. Public charging initiatives have been sketchy due to the city’s fragmented power structure. The mayor’s office and Transport for London (TfL), plus 33 boroughs divide and conquer the road space between them. Today, to charge an electric vehicle, one has to go to the source, literally.

The Source London network was formed in May 2011 by then Mayor Boris Johnson and TfL in an attempt to unite the various offers from various providers in different boroughs, who all had their own access cards and rules. 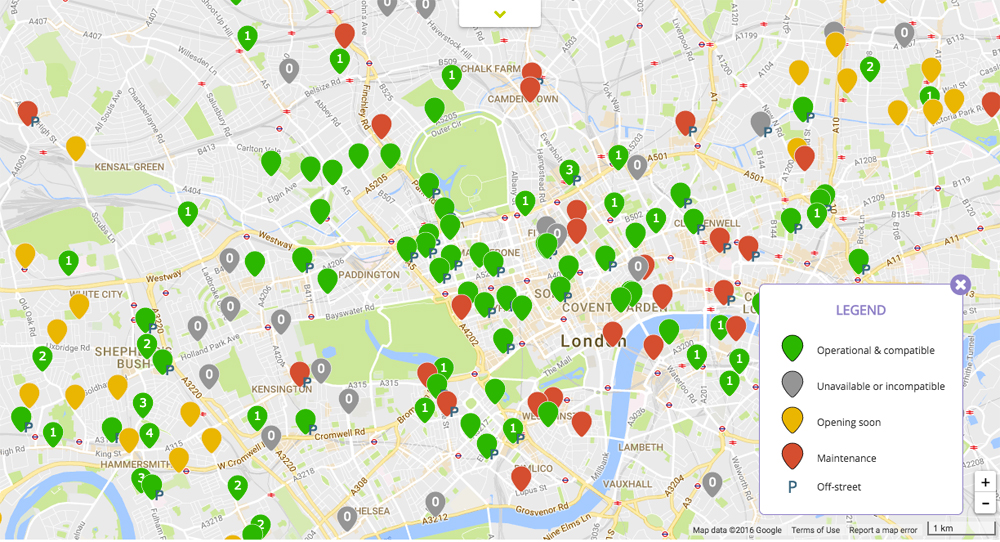 In 2014, BluePoint London, a Bolloré subsidiary acquired Source London from TfL for 1m GBP. Since then, the French group is charged with the task of repairing and (re-)uniting the Source network and says it has invested 30m GBP to date. Yet, in order to make the infrastructure functional and accessible, BluePoint has to come to terms with every borough or landowner as it is them who formally own and/or operate the charging stations. So far, BluePoint has achieved mixed results.

To charge an electric car in London, one must go to the Source

The Source Network comprises about 1,400 EV charging spots located in 33 London boroughs. Bolloré has come to an agreement with 16 of those districts at the time of writing in Nov 2016. Asked about the number of functional charge points, the company gave electrive the estimate of 1,000 but added that this number “increases on a very regular basis.” It also means that 400 chargers are still dysfunctional at the moment.

Less of an estimate was the number of fast-charging stops Source London provided when asked: zero. Yet, BluePoint recently announced it has entered into a partnership with ChargePoint to increase that number to 30 by next summer. There are also plans to add another 400 chargers to the network before the year’s end. 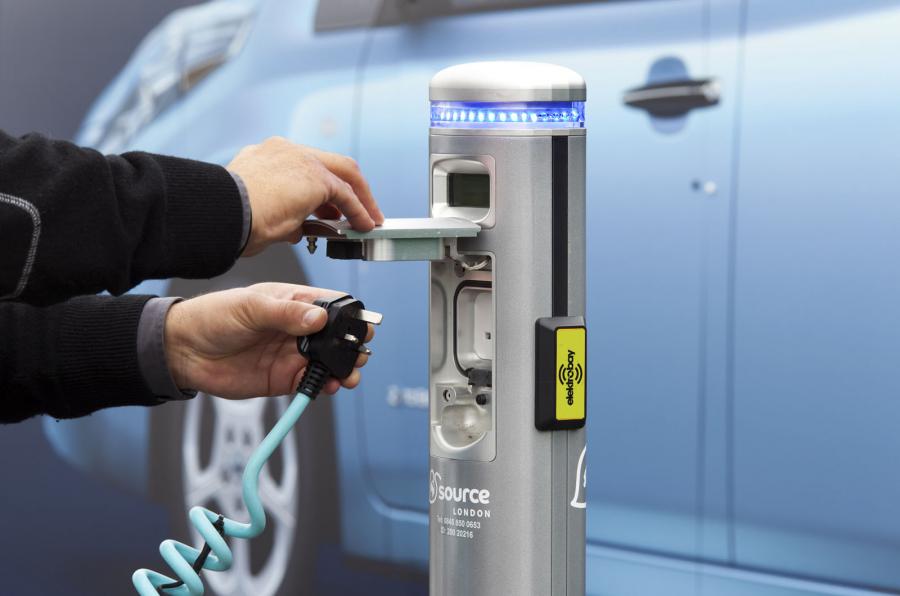 In terms of use, Source claims to have over 6,000 members and offers Type 1 as well as Type 2 charging, the latter delivering 7kW, that is about 25 miles of range per hour. While they used to be free of charge, the new operator has introduced charging fees that can be paid as-you-go and there is a monthly membership fee of four pounds. Slow charging is accounted by the minute with a 20 minute minimum. Fast-charging – once it becomes widely available – will be invoiced per session plus kWh.

“Every rapid charging session incurs a 1.80 GBP fee with another 30p per kWh. Other chargers cost 3.6p per minute with a minimum of 20 min being charged and an overnight cap.”

Progress is a lengthy process. When taking over almost three years ago, BluePoint wanted to install 6,000 charge points in London by 2018 but has since stepped back from any definite statement, now telling electrove “the date of 2018 is not yet confirmed.“

Bolloré’s intentions are genuine because running London’s EV charging infrastructure is essential to the French company. Their business case is not just infrastructure but also its EV sharing service BlueCity. 3,000 of the red electric cars were supposed to be sent to the British capital by 2018 with deliveries due to start already. But implementation lags behind and is only at trial stage at Gatwick Airport for example. 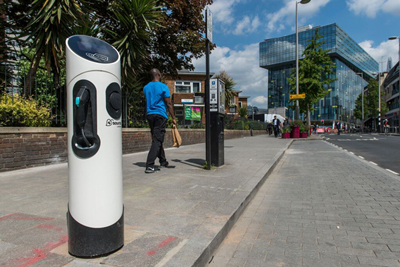 Again, it is a structural issue. The boroughs need to provide (parking) space for Bolloré to roll out its scheme as it includes EV charging infrastructure, and the French soon noted that London is not Paris, where the Mayor rules the “arrondissements.” Further plans will only be announced in early 2017.

Meanwhile, other electric car clubs are the most visible trace of e-mobility in the British capital. Transport for London lists eleven rental services in London. four of which include electric vehicles potentially. These are Co-wheels (fully electric), DriveNow with some BMW i3, and E Car Club by Europcar, as well as Enterprise. There are also ZipCar with PHEVs and HiyaCar, a peer-to-peer service that potentially includes plug-ins.

Members’ experiences with EV charging vary. Cars hired from the E Car Club “charge upon arrival, and have their own dedicated parking spots,” the provider told electrive. The firm also makes its members aware to the “plethora of charging infrastructure across London” and supplies Source London and Charge Cards.

Co-wheels that does not actually operate electric cars in London because of “competition” from both other hire firms but also London’s “excellent public transport,” they say. It has learned from customers taking their EV to the capital that the “main problem appears to be the huge number of different charge post providers, which are not cross compatible with other companies,” Co-wheels says.

Hydrogen, a matter of official will

London’s approach to fuel cell vehicles London proves the city is willing to innovate and to do so fast and in a Californian fashion. Toyota has called the British capital a key city for the introduction of its fuel cell car. Hyundai, too, offers its ix35 FCV on the Isles, and the Honda Clarity is due to follow. But so far, it has been public demand driving FCV. For example, TfL was the first customer to order four Mirai.

Hydrogen infrastructure is slowly being introduced. There is Hydrogen London, a partnership including experts from government, the industry, and academia that has been established by the Mayor of London in 2002. It is working on the London Hydrogen Network Expansion and has thus far built two hydrogen filling stations. Additionally, the UK is part of the pan-European HyFive project, of which the British Office of Low Emission Vehicles (OLEV) is a founding member.