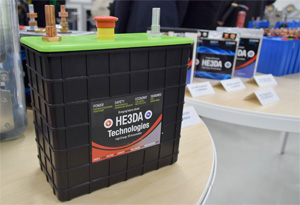 Revolutionary nano battery? It is eight times cheaper yet more powerful than conventional Li-ion batteries – such is the claim of HE3DA, a Czech company that set up its first production in Prague. 10 MWh of nano batteries that are layered like a sandwich shall be produced there but a new plant is planned in Ostrava with an annual capacity of 250 MWh. Expansion to Europe and the States plus a JV in China is the next step – if the battery truly is as good.
radio.cz

GKN to go electric: 179m dollars will be invested into GKN Driveline’s production centres in North Carolina to gear them up for electric motors mainly. The drivemaker that supplies several OEMs says this will create more than 300 jobs.
greencarcongress.com

Large battery testing: German Batteryuniversity expanded its testlab and now offers testing of large batteries as used in electric cars or forklifts. Facilities include a shaker as well as a low-pressure chamber, which can also be used to test components headed to space.
prcenter.de