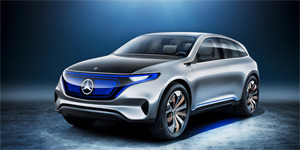 Daimler to integrate EQ and Uber: Mercedes will build electric cars in existing facilities. After Bremen, Sindelfingen is the second factory to be tasked with making ten EV by 2025 a feasible target. The Smart production site in Rastatt is part of the electric club as well. Speaking of a club, Daimler and Uber agreed to deploy autonomous cars via the latters ridesharing network over the coming years.
reuters.com (EV production), greencarcongress.com (Uber)

First electric Seat by 2019? Seat’s chief developer Matthias Rabe promised a fully electric model by 2019, when speaking to Autocar. One year later, another electrified car may made it into the line-up, possibly a PHEV but Rabe did not go into detail. The PEV will not use the latest MEB platform of VW.
autocar.co.uk

New BMW PHEV? The German carmaker announced the 5 Series Touring executive estate debut in Geneva later this spring. A plug-in hybrid version is likely, given the 5 series saloon motor line up. Yet, BMW has not made the PHEV variant official for the estate.
autoexpress.co.uk, autoevolution.com

Electrified SUV? Alfa Romeo is looking to offer another SUV apart from the Stelvio. The new Kamal is due for a PHEV variant, according to Autobild. A fully electric version would be feasible easily as well.
autobild.de (in German)

Tesla Motors is no more as a name. The company still exists of course but is now simply called Tesla Inc. The merger with SolarCity had made the motorised addition misleading.
electrek.co, insideevs.com, tesla.com

Spark EV axed: GM discontinued the Chevy Spark EV production with the Bolt launch. The Spark EV has only been available in a few states since 2013 and sold a total of 7,400 times.
detroitnews.com, engadget.com, jalopnik.com