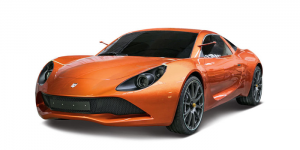 Super racer by Artega: The Italo-German house, a Paragon subsidiary nowadays, appears in an all-electric format in Geneva. Its Artega Scalo Superelletra features four electric drives that team up for 750 kW that accelerate the sports car from 0 to 100 kph in 2.7 seconds. The battery is built by Voltabox and holds 120 kWh, enough for about 500 km range. This impressive spec is not just for show though – the Scalo Superelletra shall hit the market in a limited series of 50 pieces by spring 2019.
artega.de

Rolls Royce latest cruiser is not a limousine but a ship, the first hybrid expedition cruise ship to be precise. Designed by the luxury carmaker, the MS Roald Amundsen is currently under construction at Norway’s Kleven Verft shipyard. By 2018, the vessel will carry up to 530 passengers through Antarctica and around the Chilean coast at times all-electrically, while saving about 20 percent fuel. Environmental organisation Bellona was central to the project for Hurtigruten.
maritime-executive.com

BMW i8 rival? PSA’s strong arm DS is working on a hybrid racer with more than 600 hp, according to Auto Express. Its design is based on the E-Tense concept, while propulsion may be developed by the joint venture PSA set up with three Canadian companies last year.
autoexpress.co.uk

Project Black S is Infiniti’s vision for Geneva that includes F1 technology. The concept is an exploration of the firm’s new performance line, developed together with the RenaultSport Formula One Team. It is a newly interpreted Q60 coupe with a hybrid system that includes energy recovery.
automotiveworld.com

Battery funding in Scotland: Dukosi, a specialist in battery management systems for electric vehicles and energy storage based in Edinburgh, has secured 2m GBP in funding to develop its technology. Dukosi is working to reduce the cost and weight of batteries for applications such as electric cars.
scotsman.com, dailyrecord.co.uk