Battery swap: The idea of battery swapping is here to stay it seems, just its advocates change. The latest attempt is by Mahindra founder Chetan Maini, who wants to turnover power packs with his new company Sun Mobility. Yet, he added a twist – at the base of his business are modular battery packs, suitable for all kind of EVs, i.e. two-wheelers as well as big industrial vehicles. Maini has a service model in mind that not only allows to exchange a battery pack quickly but also keeps prices low as drivers won’t need to buy the batteries. On the Indian market this might actually work.
business-standard.com, team-bhp.com 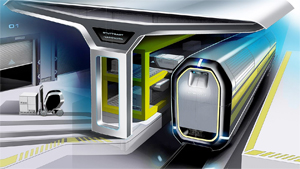 The future of freight: The German Aerospace Centre (DLR) has turned from rockets to rails as its engineers present their holistic concept for the next-gen of cargo transport. NGT CARGO – hitherto known as freight trains among earthlings – are made up of powerful end cars and intelligent single wagons, that automatically couple and only as needed. The latter come equipped with separate electric drives and recuperating batteries in order to master the last miles autonomously. DLR hopes its trains may some day replace some of the container ships trawling the seas between Europe and Asia.
greencarcongress.com, dlr.de

Coat for life: Researchers at the University of California, Riverside are en route to solve the dendrite problem of lithium metal anodes. A coating made from the organic compound methyl viologen apparently stabilises performance, eliminates dendrite growth and may thus triple the battery’s lifetime.
ucrtoday.ucr.edu

New player in the cargo trike market: The start-up Sanitov Bicycles introduces its first electric cargo trike called movE. The company was created by a Danish designer based in London and his electric trike can carry loads of up to 200 kilos in its rear box that can be customised.
treehugger.com