Polestar to go it alone and electric: Electrification plans for Volvos performance brand are no longer rumours, but got officially confirmed and defy expectations. Polestar shall become an independent EV brand and thus offer electrified sports cars under its own logo. Volvo’s head of design, Thomas Ingenlath has signed as CEO already. Further details about upcoming products and strategies shall be published in autumn but Volvo is not entirely out of the game of course as they claim “synergies” but with room for wide ranging bespoke solutions.
autocar.co.uk, europe.autonews.com, media.volvocars.com 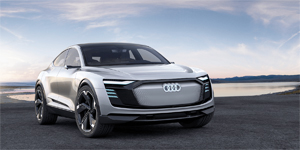 Audi’s second EV from Brussels: The German carmaker has chosen its Belgian site to produce its fully electric e-tron Sportback alongside the crossover e-tron. The latter will run off the production lines in Brussels a year earlier, meaning from 2018.
audi-mediacenter.com

Thousands of Model 3 deliveries in July? Model 3 production kick-off is approaching and it looks like Tesla is significantly accelerating preparations in order to reach large quantities fast. Insiders say several thousand Model 3 vehicles could be delivered before July’s end.
model3ownersclub.com via insideevs.com

Details about electric Smart’s cabrio: Following the electrified versions of Fortwo und Forfour, Smart plans to place the Fortwo Cabrio on the market next month. In Germany, pricing starts from 25,200 euros but that base price drops to 20,820 euros if you take the environmental bonus into account.
media.daimler.com

Chevy Bolt earns top ratings at safety test: The American Insurance Institute for Highway Safety (IIHS) has put the Chevrolet Bolt through an extensive safety test and gave it top ratings in all of its five categories. According to the IIHS report, the only weakness is the Bolt’s headlight.
electrek.co (with videos)

Tesla starts deliveries in Korea: With a kick-off event in Seoul, Tesla has officially begun to deliver its electric cars in South Korea. Also the first Supercharger has been erected in Seoul, along with 35 destination chargers. Another 14 fast-chargers are scheduled to arrive in other major cities soon.
english.yonhapnews.co.kr