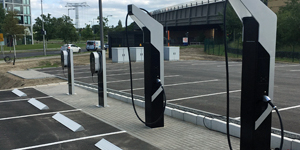 High Power Charging at 800 Volt: Porsche readies its answer to Tesla and introduces fast-charging at 350 kW at liquid-cooled stations. The first has now opened in Berlin and we were at the launch. There is seems, that VW’s sports brand is taking their Mission E rather seriously.
Read more on electrive.com >>

e-Golf production in China: Volkswagen intends to build its e-Golf in China from 2018 with batteries from local supplier Contemporary Amperex Technology Ltd. (CATL) instead of Panasonic or LG Chem, Automotive News learnt. The production shift from Wolfsburg to China, most likely to the city of Foshan, where VW already builds its combustion engine version of the Golf, may enable the carmaker to benefit from state subsidies and thus to compete on the national market. VW is going to work together with joint venture partner FAW in its latest bid to comply with the looming EV sales quota.
europe.autonews.com

Agreement after trademark conflict: Daimler and Chinese carmaker Chery have settled their dispute concerning Daimler’s use of the EQ label for green cars. They agreed to simply both use the EQ/eQ brand name. While Chery has the right to promote the designations eQ and eQ1, as well as further numerical continuations thereof, Daimler will use the EQC and any other alphabetical supplements.
electriccarsreport.com, carscoops.com, media.daimler.com

Borgward obtains EU type approval for BX7: The carmaker’s preparations for the BX7’s market entry in Europe have taken a decisive step forward, after type approval for its SUV has been given. As reported, Borgward wants to kick-off production of the fully electrified version of its BX7 in 2019 in Bremen, a PHEV version is said to follow later.
autobild.de, presseportal.de (both in German)

Prominent investor for E-bility: Former Tesla manager Peter Carlsson wants to invest in German electric scooter manufacturer E-bility and its brand Kumpan Electric. While the total amount is unknown, a part of the investment will help to launch the new model 1954Ri and to further expand abroad. Carlson also owns shares of Danish start-up Spiri and is known as initiator of Northvolt, a company that reportedly intends to erect a gigafactory in Sweden.
pressebox.de (in German)

Tesla in the United Arab Emirates: By opening its first showroom in Dubai, Tesla has expanded to the Emirates where it offers the Model S and X. While pre-orders for the Model 3 are possible, it will not arrive before 2018. Dubai has also seen the installation of the first two Supercharging stations.
insideevs.com

Mellor’s electric bus: With its Orion E, British Mellor seeks to impress at the Busworld Europe in October. The fully electric 16 seat bus enables different seating configurations and offers space for up to four wheelchairs. The vehicle’s range shall reach 100 miles with deliveries scheduled for late 2017.
Info via email