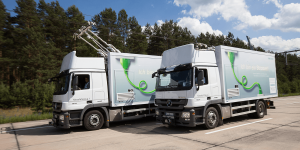 Siemens to electrify highway: The company has been chosen by the German state of Hessen to erect a 10km overhead contact line for electrified trucks at the highway A5. The installation shall provide electricity to electrified trucks and start operation in late-2018. Also a stretch of the Autobahn A1 in the country’s north has been selected to host overhead wires. Siemens originally introduced its “eHighway” concept five years ago.
greencarcongress.com, siemens.com

Update about Terra E’s gigafactory: Approximately 4bn euros have to be raised by Terra E in order to realise its construction plans for an EV battery factory, the Wirtschaftswoche has learnt. The consortium has applied for funds of the German federal research ministry and it seems like negotiations with investors are about to be completed. In order to reach a production capacity of 34 GWh by 2028, Terra E wants to create 3,000 jobs. Final location decision is announced for September, however Germany seems to have the best chances.
wiwo.de (in German)

Gigafactory 1 also world’s number one? Although the Nevada-based Gigafactory 1 by Tesla and Panasonic is just 30 percent completed, it allegedly hosts already now the biggest cell production on a global scale. According to Tesla CEO Elon Musk, the factory is producing more batteries than any other factory in the world. However, Musk still refused to disclose more specific capacity figures.
electrek.co

Webasto’s electric mobility components: At the IAA in Frankfurt, the German supplier shows its product range, developed by the company’s recently created electric mobility business unit. Among others, Webasto will use the spotlight to introduce innovative charging solutions and battery systems for electric mobility purposes.
webasto.com