Denso to extend U.S. production capacity: The Japanese supplier intends to raise 1bn dollars to boost its electrified and automated vehicle production in the States and thus to create 1.000 new jobs at its site in Maryville, Tennessee. As reported, Denso teamed up with Toyota and Mazda to launch a Japanese EV alliance, just recently. Their common objective is to develop various types of electric vehicles – from compact cars to light trucks.
channelnewsasia.com, greencarcongress.com, denso.com

PHEV version of Mercedes’ A class: The next-gen Mercedes A class is likely to debut at the Geneva Motor Show 2018, according to Auto Express. Its new line-up shall include up to eight models – among them a sedan version and a PHEV version, branded under the company’s EQ Power division. Additionally, Mercedes’ upcoming all-electric compact car EQA – first introduced at this year’s IAA – will go serial in 2019, reportedly.
autoexpress.co.uk 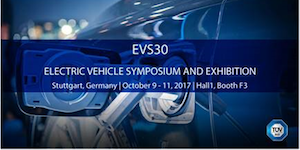 TÜV SÜD here to help: How can we enhance the widespread adoption of mobility innovations? Come talk to us at the EVS30, in Stuttgart, Germany from October 9 – 11: www.tuv-sud.com/e-mobility

U.S. prices for next-gen BMW i3: Ahead of BMW’s official announcement, U.S. pricing for the 2018-version of the BMW i3 and BMW i3 S have been published in the web: BMWBlog shows specs and prices for both cars as well as their range extender versions i3 REx and i3 S REx. Thus, list pricing varies between 44,450 (i3) and 51,500 USD (i3 S REx). Production kick-off is scheduled for November.
bmwblog.com

Toyota Century with hybrid drivetrain: The next generation of Toyota’s domestically offered luxury class sedan won’t be longer solely combustion-powered but feature a gasoline-electric hybrid system: Toyota replaces the previous V12 engine through the combination of a V8 engine with an electric motor. The new version of the company’s domestic limousine flagship is going to be on display at the Toyota Motor Show.
greencarcongress.com, autoblog.com

BAIC BJEV plans production in South Africa: By next year, BAIC subsidiary and EV specialist Beijing Electric Vehicle (BJEV) intends to kick-off production in a facility close to Port Elizabeth, South Africa. The plant has been set up for 826m U.S. dollars and is said to provide a capacity of up to 50,000 EVs per year by 2022. Most of the cars shall hit the stores in African countries.
en.people.cn