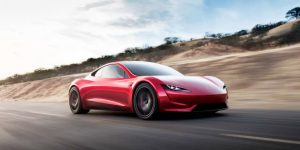 During Tesla’s semi truck event, CEO Elon Musk had a surprise up his sleeve — a new version of the Tesla Roadster. The base model will start at 200,000 Dollars. Interested parties can place their deposits today. It can seat four and travel 620 miles (1,000 km) on a single charge.

With this presentation, Elon Musk pays tribute to the early years of his company: In 2006, the Roadster has been Tesla’s first electric vehicle – at that time still on base of the Lotus Elise platform. But even 10 years ago, a 53 kWh battery allowed already a quite viable range. To that time, this technical achievement has been Tesla’s contribution to prove that electric mobility has come to stay.

Now Tesla presents a Roadster that even by today’s standards sets benchmarks: The sports car features three electric motors and is said to reach 100 km/h in just 1.9 seconds, while providing a maximum speed of 250 mph (approximately 400 km/h). That’s why Tesla calls it the “fastest production car ever”.

The Roadster shall hit the stores by 2020. Its presentation took place at an airfield in Hawthorne, next to Tesla’s development centre. The model’s range shall be 1,000 km – even at highway speed. In return pricing for the luxury EV will start at not less than 200,000 dollars. The first 1,000 models will be so called Founder’s Series models for 250,000 dollars each. Tesla’s reservation books are open for those considering to pay a 50,000 dollars deposit upfront.
reuters.com, theverge.com

Nissan’s Note e-Power to be launched in the States?