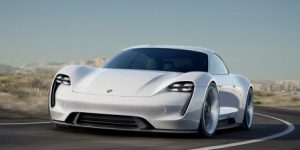 Design works for the serial version of Porsche’s first EV are completed and testing has started. That is what Autocar reports referring to Porsche’s R&D head Michael Steiner.

Thus, the serial version looks pretty much like the concept. However, the name of the serial version’s model has not yet been revealed – “Mission E” just refers to the concept. Market launch is scheduled for 2020, with several performance versions available. Besides that, Porsche’s next EV will be a SUV, according to Steiner. And the next-gen 911 could get be offered as PHEV, too, but a final decision has not yet been taken.

Porsche builds the Mission E on base of its self-created J1 platform that differs a lot from other EV platforms within the VW group, e.g. the battery has a much lower position. However, the J1 architecture won’t be utilised in Porsche cars only. Just recently, Bentley head Wolfgang Dürheimer announced that they plan an electric sports car that will be based on Porsche’s platform.
autocar.co.uk